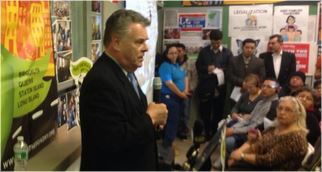 Congressman Peter King spoke to a packed house in Brentwood on Friday night on immigration reform. The word he brought from Washington was not good. According to Representative King, the reaction at a Republican retreat to John Boehner’s principles for immigration reform was not all united in support. The anti-immigrant wing of the party recoiled in revolt at the suggestion of a broad legalization of the undocumented. While King said he believed House Speaker Boehner was committed to an immigration overhaul, he warned the audience that nothing was likely to happen in the next few months before the Republican House primaries are over. He said that most Republican incumbents are much more frightened of a primary challenge from within their own party than they are of being unseated by a Democrat.

King cautioned that reform may not even be put back on the Congressional agenda at any time this year and that it may have to wait until next year. He said that he believed that pressure to win Latino votes for a Republican bid for the presidency could restart the move towards reform.

Personally, King once again expressed his full support for immigration reform modeled on the reform passed last year by the Senate. He said that he hoped that it would be taken up again as soon as possible so that immigrants could come out of the shadows and so that “their human rights could be protected.” In response to a question from Make the Road’s Carlos Reyes, King said he would write to Boehner asking for action this year on immigration reform and he said that he would prepare an op-ed article in favor of Republican action on immigration reform with a pathway to citizenship.