An overflow crowd of more than 200 people filled the Brentwood Library’s conference room last night for that community’s first chance to meet with Congressman Peter King. The Congressman’s district was moved last year to include the Brentwood and Bayshore areas. His district, once the least diverse on Long Island, is now the most diverse. One-in-five people living in King’s district is Latino and nearly four-out-of-ten are non-white. 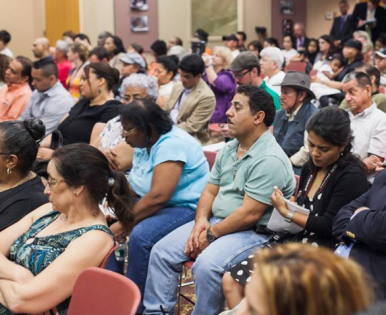 The meeting was sponsored by the NAACP, the Long Island Civic Engagement Table, and Long Island Wins and was supported by a number of organizations including CARECEN and Make the Road New York. King arrived a half hour before the start of the forum to meet with constituents and he stayed afterwards to take questions. The centerpiece, however was a question and answer session with nine community leaders including myself.

King was asked twice about whether he would support immigration reform and how he thought it should be implemented. He said that while he believed that immigrants should enter the U.S. legally, he was a realist and understood that it was counterproductive to have eleven million people hiding in the shadows. He told the audience that “99%” of the undocumented were “good people” and that they should not only be able to legalize their status, but that they should have a path to citizenship.

King was asked whether he supported the Senate approach to reform and he responded more equivocally. He said he was concerned that any immigration reform bill adequately secure the border and fully track the departure of people who come to the United States on non-immigrant visas. He did not express any reservations about the path to citizenship in the Senate bill. He also said that once immigration reform passed, it should be implemented as quickly as possible to bring people out of the shadows.