Last week, I attended our monthly welcoming circles in Brentwood and Port Jefferson. The circles, a collaboration between Welcoming Long Island and Herstory, provide a space for a diverse mix of people to hear stories of Latinas on Long Island and discuss their own experiences.

The welcoming circle at the Brentwood Public Library, on August 14, had some familiar faces present, but mainly consisted of newcomers to the workshop. During the introductions, people gave some basic information about themselves: where they were born, where they worked, why they decided to join the circle. The people in attendance were of various faiths, worked in a wide range of career fields, and had roots in Mexico, Ecuador, Bolivia, and the Philippines. For most people this was their first experience with a reading circle, but for others it was their third and fourth time; they expressed their love for the atmosphere the workshop provides.

One aspect of the conversation that I found interesting revolved around the theme of identity. There were a few people that spoke about giving up their identity when coming to the United States and forming a new identity during the process of assimilation. Ángel, a man who immigrated to the US from Mexico about a decade ago, noted the importance of bilingual workshops; being around people who speak English helps him to continue to integrate the language into his everyday use. In my opinion, his efforts were really paying off.

Stephany Ramírez, the guest reader that night, took the floor to read her story, “To Hold You in My Arms,” which is included in the Latinas Write/Escriben anthology, the Herstory-produced book that we read from each week. Stephany’s journey begins in the Dominican Republic where she is saying goodbye to the family and life she had always known, and ends at the John F. Kennedy airport reuniting with her mother in the midst of winter wearing a bright “beautiful yellow dress.” 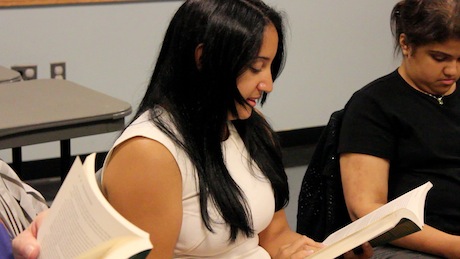 The story resonated with all the members of the audience; people had been apart from their children for years, some knew what it was like to finally be reunited with their families, and others related it to the experience of divorce.

I found myself thinking about my experiences in airports in Ecuador and Guatemala. I’ve traveled on vacation to my parent’s home countries since I was about Stephany’s age in the story. I’ve been an immigrant to these countries, attempting to adapt to their cultures and lifestyles, but never had the opportunity to truly assimilate, because soon enough it would be September and it would be time for school. Stephany’s story made me realize that in traveling between Latin America and the US, I’m an immigrant to both regions.

In living across cultures, I’ve been able to experience a taste of life in Latin America, which has led me to become an advocate for reasonable immigration solutions that include and work for everyone. Through my travels over the years, I’ve seen firsthand the reasons why people migrate whether it be political repression, jobs, or to reunite with family members, like Stephany.

That night Stephany was wearing a white dress, but I could still envision her arriving to JFK airport in her bright yellow dress with a smile as she finally realized her dream of being reunited with her parents.