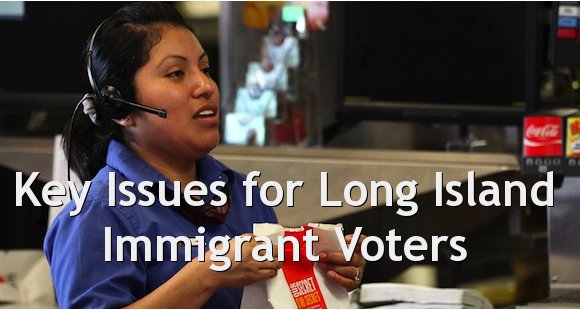 The election is quickly coming up, and again every poll shows that the economy and jobs are the top issues in our community. Any politician who wants our support needs to see that the best way to address these concerns is to raise the minimum wage. Too many of us know what life on a minimum wage is like; thousands of us never manage to make ends meet, despite working two or even three jobs.

We can’t live here on Long Island for $8 per hour. Fast food workers, restaurant workers, and factory workers like me—we can’t live on $8 per hour. We need a higher wage to improve our families’ lives and be able to invest more in our state’s economy. And expensive localities like Long Island’s counties need to be able to raise it even further.

The minimum wage was put in place to ensure that all the workers in this country can earn a living without relying on government or charity handouts. The minimum wage was a central pillar of the largest sustained growth period in American history, until it was frozen in 1981. Since then, due mainly to petty partisan bickering, it has remained well below the needs of the workforce and has not kept up with inflation or real wages, leading to the current situation: where the floor is so far below the surface, that we are just struggling to stay afloat.

Despite what most people think, it is not small businesses, but big corporations, who benefit the most from a low minimum wage, while taking home massive profits. Last year, McDonalds made over $8.7 billion profit for its corporate stores. If McDonalds chose to lead the way forward and doubled their current average wage of $7.81 per hour, they would still make more than $5 billion in profit. They would also get the less tangible benefits of recruiting the best fast food work force and becoming a prime example of social responsibility.

However, dreaming about corporate responsibility is not enough. Our elected representatives must lead the way to restoring a just minimum wage for working families. We are demanding an increase to at least $10.10 per hour, indexed to inflation, with authorization for localities to raise it even further.

In the next few weeks we will get bombarded with pleas for help and support from every elected official who finally understands the power of our vote. We will in turn be watching carefully to see who will be standing with us. Whoever it is, they must understand that raising the minimum wage is fair and just, will help our families get out of poverty, and boost the local economy.

-Alexander López is a Long Island member of the Make the Road Action Fund. The views expressed here are not necessarily those of Long Island Wins.