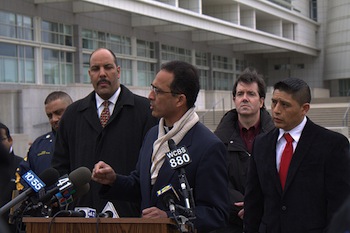 A coalition of Long Island advocates and a representative from the Southern Poverty Law Center met with the U.S. Department of Justice in Central Islip on Monday to discuss how infighting among Suffolk officials might have affected the county’s handling of hate crimes.

After the meeting advocates addressed the press, and I’ve posted photos of the press conference as well as a roundup of media coverage.

In addition to those stories, I published a column on The Huffington Post this morning about the feud between Suffolk County Executive Steve Levy and his former hate crimes commander.

Since taking office in 2004, Steve Levy, the highest-ranking official in Suffolk County, NY, has faced a broad range of criticism for ignoring a pattern of violent crime against Latino immigrants.

From local groups like the Long Island Immigrant Alliance to the editorial pages of the New York Times, critics have warned Levy that speeches and policies targeting immigrants can fuel the fire of anti-immigrant hate, but he brushed away that advice as the ramblings of “the one percent lunatic fringe.”

He’ll have a harder time ignoring the latest critic of his record on hate crimes.

In January, Levy and his longtime hate crimes commander embarked in a war-of-words, and the resulting feud—which played out in the press—serves as an indictment of the way Suffolk has handled such crimes.

Here’s some of what she wrote:

A public dispute between Suffolk County Executive Steve Levy and Det. Sgt. Robert Reecks regarding the Hate Crimes Unit of the Suffolk County Police Department is raising concerns among national and local immigration leaders over the way the county is dealing with bias crimes.

In January, Reecks, who was head of the hate crime unit for 13 years, told Newsday that Levy whitewashed hate crimes and directly inhibited his work, interfering in the handling of cases as well as what information was provided to the public.

Levy responded with a statement saying that Reeks’ declarations were “replete with falsehoods and devoid of numerous crucial facts.” He claimed that Reecks was retaliating after being passed over for a higher position in the department. “Reecks was miffed that he was not assigned to the new position and had not scored high enough on the lieutenant’s exam to be considered for that rank,” he said.

“Both allegations are very serious,” said Anthony Miranda, executive chairman for the National Latino Officers Association of America. “If Reecks didn’t qualify and was not familiar with the law, after being in charge of the unit for so long, it means that all the investigations are potentially flawed and were investigated improperly. And if Reecks allegations about the Executive sanitizing how the investigations were held then there was an abuse of authority and political interference,” Miranda warned.

Either way, Maryann Sinclair Slutsky, the director of Long Island Wins said, this indicates that the unit is doing a bad job.

“Regardless of who is telling the truth, this episode shows clearly that Suffolk County’s handling of hate crimes is completely dysfunctional and must be overhauled to put a stop to the wave of hate violence we’ve seen over the past several years,” said Slutsky.