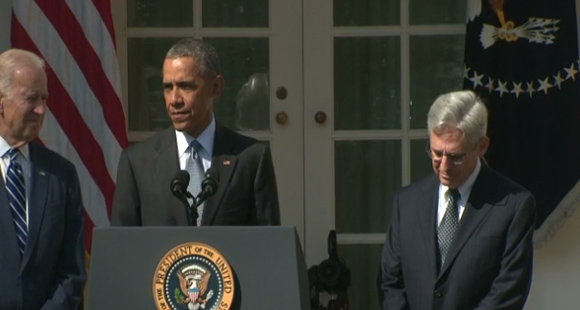 President Obama has fulfilled his constitutional duty to the American people. On Wednesday, Obama nominated Judge Merrick Garland for the Supreme Court of the United States, asking the Senate to be “fair” with his nominee.

During the announcement at the White House, Obama said that the country would suffer if this nomination turns into a political dispute and asked U.S. Senators to vote on his nomination as quickly as possible in order ensure people’s trust in the judicial system.

“I have selected a nominee who is widely recognized not only as one of America’s sharpest legal minds, but someone who brings to his work a spirit of decency modesty, integrity, evenhandedness and excellence,” Obama said. “These qualities and his long commitment to public service have earned him the respect and admiration from leaders from both sides of the aisle.”

Judge Garland, 63, is currently the Chief Judge of the Court of Appeals for the District of Columbia. He was confirmed for this court in 1997 with majority support from both parties in the U.S. Senate.

Born and raised in Illinois he has dedicated his life to serving the American people. He is considered a role model for “neutrality” according to news reports. The White House described him as the Judge with more federal judicial experience than any Supreme Court Judge in history.

See this video and learn more about Justice Garland:

In the wake of the Oklahoma City bombing, Garland led the investigation and prosecution that ultimately brought Timothy McVeigh to justice – working with federal agents, rescue workers, local officials and others. Beyond the courtroom, Garland is a committed mentor. In addition to mentoring hundreds of law clerks throughout their careers and encouraging them to pursue public service, Garland has for almost twenty years, tutored second, third and fourth grade students in Northeast DC in reading and math.