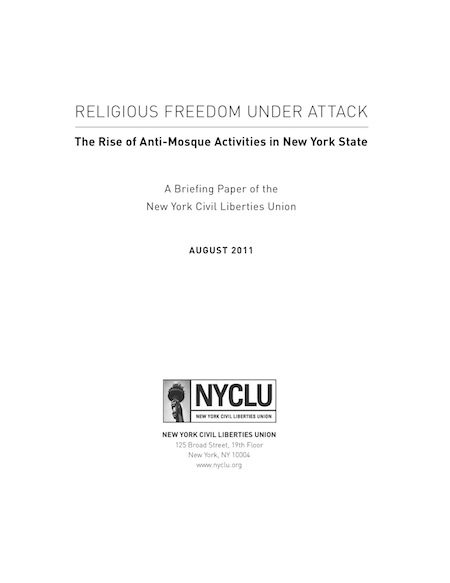 The briefing paper, Religious Freedom Under Attack: the Rise of Anti-Mosque Activities in New York State, explores the legal and cultural background against which mosque controversies have unfolded across the state over the past year. It calls on public officials to promote intercultural understanding of Muslim New Yorkers while respecting the First Amendment rights of those who oppose mosque projects.

“When we violate one group’s freedom, everybody’s liberty is at stake,” said NYCLU Executive Director Donna Lieberman. “While opponents of mosque projects have a constitutional right to express their views, our public officials must work to ensure that New York remains a welcoming place for all who want to live and worship here, and that the rights and freedoms of those who wish to build mosques are also protected.”

The paper provides nine examples of incidents across the state in which Muslim communities were targeted for their beliefs and practices by their neighbors and/or local governments. It chronicles the fierce opposition to the proposed Park51 Muslim community center in Lower Manhattan, and details heated opposition to mosques and proposed mosque projects in Sheepshead Bay, Brooklyn; Midland beach, Staten Island; and three communities in Long Island. It also covers three incidents in upstate New York in which mosques were subjected to harassment and attacks.

“Government policies that cast blanket suspicion on all Muslim residents are misguided and divisive,” said NYCLU Advocacy Director Udi Ofer, an author of the paper. “Religious profiling was unconstitutional before 9/11, and it’s unconstitutional after 9/11. Our elected officials must stand up for religious freedom and ensure that New Yorkers treat each other with respect and understanding.” 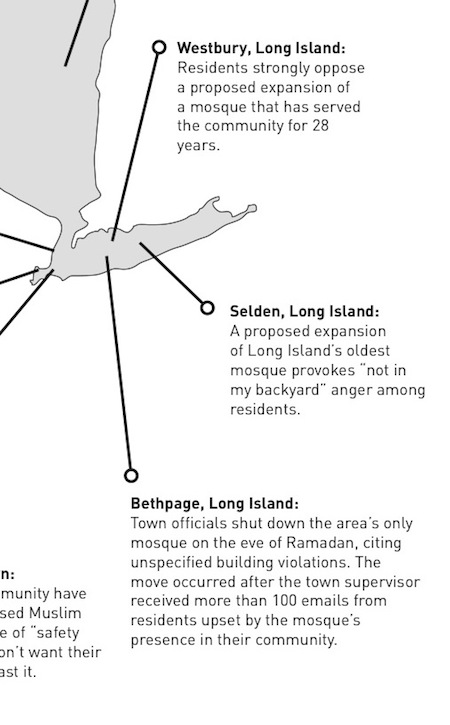 The NYCLU offers the following recommendations to federal, state and local public officials to protect religious liberty while also respecting the First Amendment rights of those who oppose mosque projects:

—Elected officials should play an active role in protecting the rights of Muslim New Yorkers and fostering cross-cultural understandings.

—New York should prepare for another backlash against Muslims leading up to the 10th anniversary of 9/11, and during next year’s presidential and congressional elections.

—The NYPD should reject trainings based on its flawed radicalization theory, include information about New York’s diverse cultures and religious communities in its training materials and be transparent about how it trains its police officers about Islam and Muslim New Yorkers.