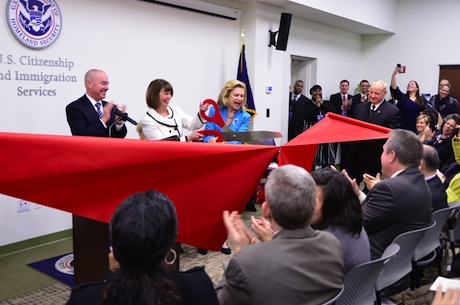 A January ribbon-cutting ceremony at the new immigration office in Queens. (Credit: The Beacon)

The schlep to downtown Manhattan to file paperwork with U.S. Citizenship and Immigration Services may be a thing of the past for some outer-borough residents, now that the agency has opened its first New York City office outside of Manhattan.

The two-story Queens office, located in Long Island City at 27-35 Jackson Avenue, opened on Friday, January 20, to provide immigration services in the city’s most ethnically diverse borough. Before this, residents in Queens and Brooklyn had to go to Manhattan or Long Island for immigration needs.

According to the Queens Chronicle:

As the most diverse county in the country, Queens was “the most natural choice” for a new office, USCIS New York District Director Andrea Quarantillo noted.

In Queens, more than a million people — nearly half the borough’s population — were born in a foreign country. Of these immigrants, only half are U.S. citizens, according to Census data.

The Long Island City office has 38 interviewing officers and will be able to accommodate 500 people a day, according to Quarantillo.

El Diario La Prensa spoke to Colombian Jesús Rosero, 73, from Astoria, Queens as he was leaving the office:

“The service is excellent and much better.”

One of the best benefits for Rosero is the location of the office and how quickly employees attend to the public. “There is a lot of public transportation nearby and it saves you a trip to Manhattan where there is a lot more people.”

“A large percentage of the people that come to the office are Hispanic.”

“To serve the Hispanic community that visits the office, announcements are provided in English and Spanish. There are also bilingual employees available to help those that don’t speak English and to inform them of the different services that are provided.”