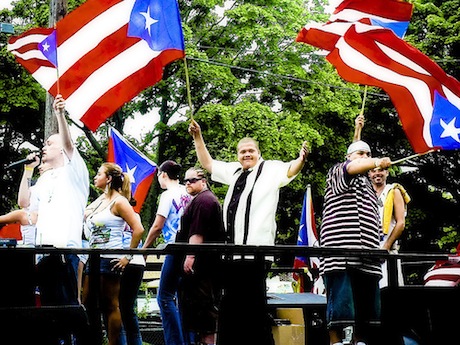 For the past 45 years, the Puerto Rican/Hispanic Day Parade in Brentwood has served as a celebration of boricua and Latino heritage for all residents, Puerto Rican, Latino, or otherwise. But the parade was nearly canceled this year when its past sponsor, the the non-profit organization Adelante, couldn’t procure the necessary funding.

Enter Assemblymember Phil Ramos and the non-profit theater group Teatro Yerbabruja, who said at a press conference today that they’ll keep the parade alive and fundraise to support it.

“We had to save it,” said Assemb. Phil Ramos (D-Central Islip), who helped organize the effort. “To the Puerto Rican community our identity is something very important and I think the parade goes to the heart of who we are.”

Close to 59,000 Puerto Ricans live in Suffolk County now as part of a Hispanic community of more than 246,000 people who trace their origins to various Latin American countries.

Adelante officials have said the event attracts more than 30,000 people on average, although an estimated 50,000 were said to have attended last summer.

The group announced last week that it could not afford the parade this year as it struggles to save other programs for youth and seniors as government grants and corporate donations decline.

Margarita Espada, a Central Islip resident who is director of the Yerbabruja group, said she will be heading the effort to keep the parade alive to showcase the best of Puerto Rican and other Hispanic heritage.

She was the main organizer of the Downtown Brentwood Community Arts Festival that took place last September.

“All we want is to take on the torch and continue the tradition, so that we can honor those pioneers who started this celebration,” Espada said. “We are going to be looking for sponsors, for people to come and march and for volunteers to help us.”

Although she did not raise objections to Yerbabruja putting on the event, Adelante director Miriam M. E. Garcia said her organization reserves the right to bring its parade back if it obtains sufficient funding for next year.

“Anybody can put on a parade, but we hope Adelante’s parade will continue,” Garcia said. “We are looking to start planning to make it bigger and better and to invite more ethnic groups.”

Margarita Espada, referenced here as the artistic director for Teatro Yerbabruja, is also a former organizer for Welcoming Long Island, an initiative of Long Island Wins.