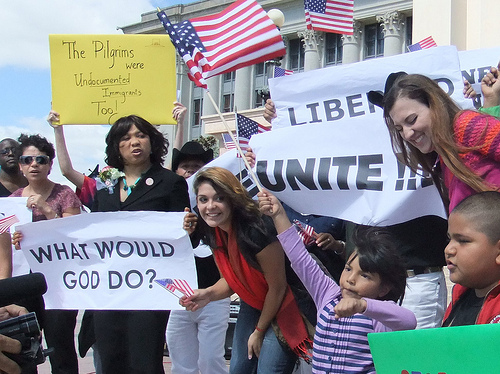 Calls for unity at a September 2010 rally in Oklahoma City, the state capital.

With all the attention I’ve been giving to Arizona’s attempt to take away birthright citizenship from the US-born children of undocumented immigrants, I don’t want you to think that the desert state is alone in this hate-filled effort.

Right alongside Arizona is Oklahoma, where 30 bills targeting immigrants have been filed in the past year. Here is a sampling of what these bills would do if they were passed:

1. Require school districts to inquire into the immigration status of children and charge them for public education if they are undocumented, a clear violation of the Supreme Court’s ruling in Plyler v. Doe.

2. The “Interstate Compact for Birth Certificates Act” is a mirror of one of Arizona’s bills. It would deny citizenship birth certificates to US-born children of the undocumented.

3. Another Arizona clone would allow police to investigate the immigration status of people they suspect of being undocumented.

4. A bill would allow the Oklahoma criminal justice system to issue warrants for immigrants who illegally re-enter the United States and detain them in state prison.

5. Another bill would forbid the rental of apartments to undocumented persons.

And don’t think that if an anti-immigrant bill passes, the furor will die down. A couple of years ago, Oklahoma passed tough anti-immigrant legislation and it merely set the stage for new bills as lawmakers saw they could attract attention by championing the cause of restrictionism.

Over the next few weeks, I’ll look at the often-unconstitutional legislation being brewed by anti-immigrant groups around the country.