Most of us have seen the famous photograph of the completion of the first Transcontinental Railroad in 1869. Two trains, one from the East and one from the West are head to head with hundreds of jubilant men in front of and on top of the engines. The photo of the laying of the Golden Spike in Promontory, Utah is one of the most iconic images in American history. It symbolizes progress and the unification of the country just four years after the end of the Civil War. 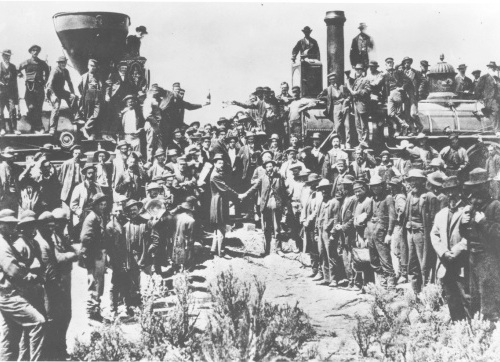 If you look at the 1869 picture of the event closely, you will notice that, while it includes engineers, businessmen, and workmen, there are no women and no Chinese laborers in the scene. The railroad’s labor force was heavily immigrant, with Irish making up a large part of the workforce from the East and Chinese making up more than 60 percent of those from the West. While the white workmen were featured in the photo, the Chinese were not. 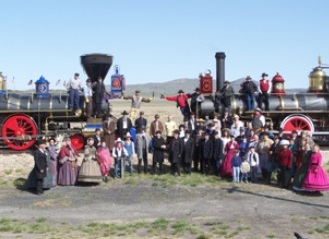 A reenactment of the golden spike photo including women and children.

In subsequent “reenactments” of the laying of the Golden Spike, the exclusion of the Chinese from posed photos continued. The reason offered for the exclusion has been that since Chinese were not in the original photo, it would be historically inaccurate to include them now. Asian Americans point out that women were not in the original photo either, but they are often in the modern reenactment shots.

On Saturday, two hundred Chinese Americans and visitors from China took part in what they called an “act of photographic justice,” recreating the 1869 photo with an all-Asian cast (pictured above). Margaret Yee, an advisor to two Utah governors and the descendent of a railroad worker, said of her ancestor and the other workers “We came to pay them respect. One-hundred-forty-five years ago, nobody recognized them,” according to the Salt Lake Tribune.