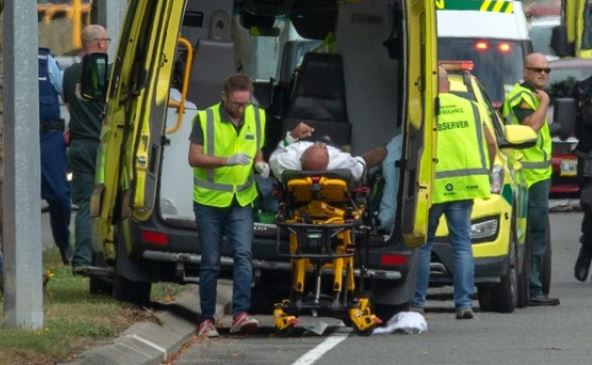 Using language that might be heard at a Trump rally, the terrorist wrote hours before the attack that immigrants are participating in “an invasion.” This justified his killing of people at worship because there “are no innocents in an invasion, all those who colonize other peoples [sic] lands share guilt.”

The terrorist says in his online posting that he is “just a regular white man” who “decided to take a stand for the future of my people.” He wrote that he was carrying out the attacks to “show the invaders that our lands will never be their lands.” He said that the attacks would “directly reduce immigration rates to European lands by intimidating and physically removing the invaders themselves.”

Tarrant himself was not a New Zealander, but had moved there from Australia. Ironically, he carried out his “defense of the West” in a country that is as far removed from Europe, and the West, as possible.

Tarrant wrote that he hoped to provoke non-white people into retaliatory attacks that would heighten social conflict. He said that he wants to “agitate the political enemies of my people into action, to cause them to overextend their own hand and experience the eventual and inevitable backlash as a result.” Tarrant wanted to “incite violence, retaliation and further divide.”

Even Tarrant’s choice of weapons was designed for political effect. He wrote:

Tarrant echoes the white nationalists at Charlottesville praised by Donald Trump as “good people” when he writes of the “replacement” of white people:

“We are experiencing invasion on a level never seen before in history. Millions of people are pouring across our borders…Invited by the state and corporate entities to replace the White people…The crisis of mass immigration…will ultimately result in the complete racial and cultural replacement of white people.”

The manifesto says that the “replacement” of whites through immigration is “White Genocide.” In retaliation, Tarrant says, “we must crush immigration.”

The terrorist writes that he hopes “to show the effect of direct action, lighting a path forward for those that wish to follow.” The term “direct action” has been employed by terrorist groups for more than a century as a euphemism for violent attacks. He says that he hopes such acts will be carried out by white people who want to “free their ancestors lands from the invaders grasp…” He wants to “crate an atmosphere of fear…in which drastic, powerful and revolutionary action can occur.”

Elsewhere in the manifesto, the terrorist writes that “Civil war in the so called “Melting pot” that is the United States should be a major aim.”

There are many contradictions and inconsistencies in the manifesto. For example, Tarrant says that he was inspired to launch his attacks by the apparent terroist killing of Ebba Akerlund, a little girl. However, he also says he began plotting the attacks two years ago, which would be earlier than the date of Akerlund’s death.

He also says that he was inspired to carry out the mass murder by seeing the graves of the World War I and World War II dead during a visit to France. He felt that the modern white race had betrayed what those men had died for. Of course, nearly all of those old graves are of white men who killed other white men.

Tarrant uses a slogan employed by white supremacists worldwide as his motto: “We must ensure the existence of our people, and a future for white children.” The motto is so common that its is called “The Fourteen Words” on the “Alt-Right.” This phrase was used by the white nationalist activists at Charlottesville.

The manifesto contains a long list of questions and answers. One question Tarrant poses to himself is “Was the attack anti-immigration in origin.” The answer he provides is; “Yes, beyond all doubt, anti-immigration, anti-ethnic replacement and anti-cultural replacement.”

Tarrant says that he was radicalized through research on-line. He pointed to American conservative activist and Trump apologist Candace Owens as one of the sources of his ideology.

Tarrant, like many white nationalists, endorses the killing of the children of immigrants. He writes that the “Children of invaders do not stay children, they become adults…Any invader you kill, of any age, is one less enemy your children will have to face. Would you rather do the killing, or leave it to your children?”

Views like Tarrants can be readily gleaned from the internet. Radicalization of “Lone Wolves” is a goal of many white nationalist hate groups. The messages and memes are exterminationist in their rhetoric and goals. They are amplified by politicians like Donald Trump who gives apects of these messages of hate world-wide aplification.