Each semester that I teach immigration law at Hofstra Law School, I start by asking students to tell me what the largest immigrant group on Long Island is. Most times, the first country of birth offered by a student is Mexico.

My students are often surprised to find that Mexicans aren’t the most numerous immigrant group; they aren’t even one of the top 10.

The biggest foreign-born group is from El Salvador. Last month’s Census report from the American Community Survey (ACS) said that with more than 54,000 residents born in El Salvador, that group had nearly twice as many people as the next largest demographic, Indians. Click here for the Nassau County data table from the survey and click here for the Suffolk County data. 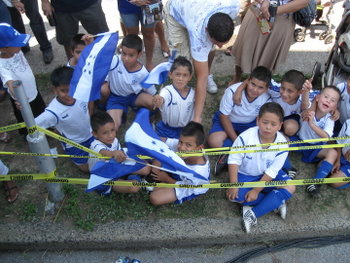 Children at the 2010 Salvadoran American Day Festival in Hempstead.

While there was a small Salvadoran population on Long Island in the 1960s and 1970s, the outbreak of civil war in that country in 1979 droves tens of thousands of war refugees here during the 1980s and 1990s. Salvadorans are the largest group in both Nassau and Suffolk counties.

More than 28,000 Indians live on Long Island, making them the second largest foreign-born group. Indians are closely followed by Italians, with 26,898 residents. In my class, I try to tip the students off to the large number of Italians by hinting that there is a restaurant from this country in every village on Long Island, but apparently they don’t think of pizza as ethnic cuisine.

Long Island’s 19,764 Haitians suffered greatly last year during the earthquake. That community skews towards Nassau, where it is the fourth-largest group, right after Italians.

Ecuadorians are the region’s seventh largest group, with 14,202. In Suffolk, they are the fourth largest, concentrated in the Patchogue area near where Marcelo Lucero was killed in 2008.

Long Island also has a large number of people born in the Philippines, 13,219, many of whom came here as nurses. The ninth-largest group is from Korea with 12,470 residents, and Poles round out the top 10 with 11,249. The Polish community is concentrated in a 15-block area near Polish Hall in Riverhead. 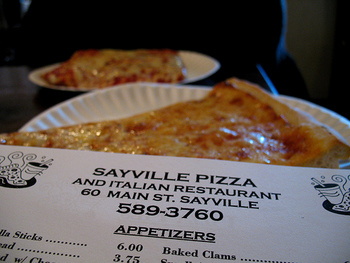 A cheese slice at Sayville pizza.

The incredible diversity of Long Island’s foreign-born population is even clearer when we look at the individual counties. In Nassau, for example, the seventh largest group was born in Iran, largely Jewish immigrants who came to the United States in 1979 and 1980.

With all of this diversity, why do my students think that Mexicans are the dominant immigrant group here?

Ten years ago anti-immigrant activists in Suffolk began ratcheting up the rhetoric against immigrants, a phenomenon documented in a 2009 report by the Southern Poverty Law Center.

Those local activists were tied to national organizations – groups that traded in conspiracy theories like one theory alleging that a secret national cabal was fostering Mexican immigration for the purpose of annexing parts of the US to Mexico. The fact that Mexican immigration to Long Island is substantially lower than to other parts of the US did not fit this narrative, so the groups distorted the numerical facts.

The influence of these groups played out tragically in the Patchogue area where young white men repeatedly assaulted immigrants, calling them “dirty Mexicans,” when nearly all of their victims were Ecuadorians, Dominicans, and Salvadorans.

With nearly one-in-six Long Islanders an immigrant, it is time that the forces of division no longer define how we look at this vibrant aspect of Long Island life.