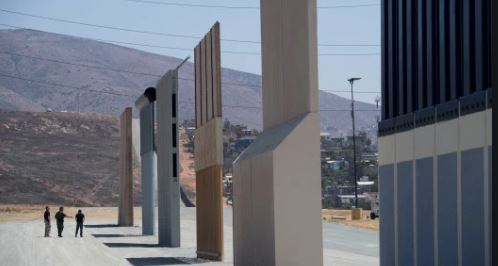 Julie Hirschfeld Davis, a reporter for the New York Times, has a new book out on Donald Trump’s attack on immigrants. It is filled with policy discussion, but it also relates some incredible anecdotes about Trump’s obsession with immigration. One of the weirdest is the story of his December 4, 2018 meeting with then-Homeland Security Secretary Kirstjen Nielsen where he decided to change the design from his original concrete Border Wall to something completely different.

Concrete had been discarded as a material for the wall because, Trump found out after touting it for months, smugglers could inject expanding grout into it and it would crumble within 24 hours. When Trump met with Nielsen he said:

“It’s got to be steel bollards,” Trump told Nielsen that afternoon, describing his vision for what seemed like the millionth time. This was his latest infatuation. During his campaign, Trump had said he wanted a wall built of precast cement slabs, and as president he had proudly posed for the cameras in front of massive, concrete prototypes that towered over him. But he had since shifted his focus. Border officials didn’t like concrete walls because they made it impossible to know who or what was on the other side. Besides, his homeland security advisers had explained to him, concrete was exceedingly easy to break apart. All you had to do was drill a small hole and inject expanding grout—available cheap from any Home Depot—and within twenty-four hours, the cement would begin to collapse. After many months of painstaking conversations, Trump had been convinced that heavy-duty steel posts were the way to go instead, and that was what his Department of Homeland Security had signed contracts to have built.

That might work, Nielsen said, as she explained, once again, that such a design would require some kind of stabilizing bar at the top. Otherwise, the engineers said it would be too easy for someone to pull down individual poles or spread them apart and slip through the barrier into the United States.

No. No. No, Trump said. If you have a bar at the top, people can throw a rope over it and climb over the fence. Plus, it’s ugly. This has to be beautiful. Think of it like flagpoles, he told Nielsen, using his hands again to demonstrate a series of lines placed close together. A flagpole next to a flagpole next to another flagpole. “I have the best flagpole guy in the country,” Trump assured her. “I’ll put you in touch with him.” And also, he continued, the tops of the poles have to be sharp and pointy, so that no one will dare try to climb over it. And the pointy parts should be painted black, so that they get hot in the bright sun. That will help to deter anyone trying to climb up.