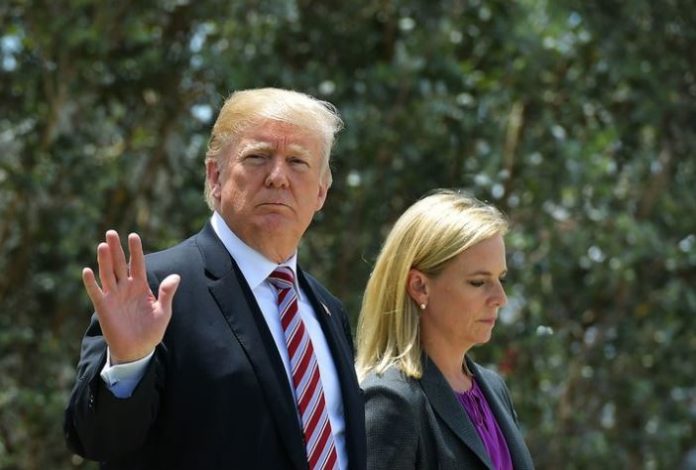 Speaking Friday about immigration, Donald Trump denounced the requirements of humane treatment for detained children contained in the Flores settlement agreement. Trump said “The Flores decision is a disaster. I have to tell you, Judge Flores, whoever you may be, that decision was a disaster for our country, a disaster.” There was no “Judge Flores” involved in this case. It is called the “Flores Agreement” because of the lawsuit, brought on behalf of 15-year-old refugee Jenny Flores, named after its lead plaintiff. The lawsuit was Reno v. Flores. This is how settlement agreements get their names, they come from the name of the lead party. High school students who have taken U.S. History and Government know that Dred Scott was not the name of the judge who issued the infamous decision.

There was so much crazy news from Trump this weekend on immigration, that you might have missed this one. He called for ending the asylum process, which would violate the United States’ obligations under international law and under the 1980 Refugee Act. He also called for eliminating the use of immigration judges, a violation of the due process guarantees embedded in our laws. All of that just on Friday.

Then Trump demanded that Homeland Security Secretary Kirstjen Nielsen leave office in a Sunday meeting with her. As Americans prepared their dinners, news came that she had resigned, giving only two days notice. Trump wanted someone “tougher” than a person who had torn mothers from their babies and put children in cages.

Or, perhaps you heard Trump’s “Judge Flores” remark but you dismissed it as a “gaff.”

I think it was not a gaff, but a significant display of how Trump uses immigration.

Trump has been attacking the Flores Agreement for more than eighteen months. He gets cheers at rallies every time he blames the border situation on “Flores.” But he apparently does not even know what it is, other than an applause line in his speeches. For all the attention he gives Flores at his rallies, he apparently has devoted no time to reading it, or even learning what it is.