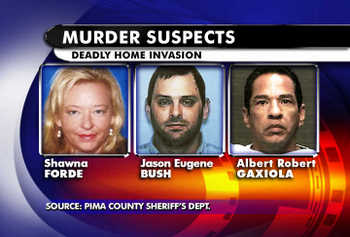 A jury of eleven women and one man enter a second day of deliberations today to decide the fate of accused murderer Shawna Forde.

Forde is on trial for the murder of Raul Flores and his 9-year-old daughter Brisenia in a May 30, 2009, home invasion allegedly intended to raise funds for the Minuteman American Defense, a militia organization of which she is the head. Forde faces the death penalty if convicted of the murder charge.

In summation last week, Forde’s defense team argued that poor police work, in which footprints from the attackers were not preserved and no fingerprints matching Forde’s were found, compromise the prosecution’s case.

In addition, the defense team made much of the description of Forde’s hair color by the only surviving victim of the attack, Raul Flores’ wife, Gina Gonzalez.

Gonzalez described the female invader as having dark hair with blond highlights. Forde’s hair is blond. Prosecutors say that Forde may have been wearing a wig.