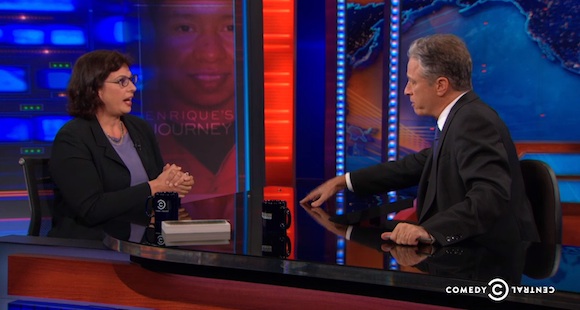 Pulitzer Prize-winning author Sonia Nazario was on the Daily Show with Jon Stewart recently to talk about child refugees fleeing violence in Central America. In the interview, she argues that the U.S. must defend these children as they have refugees in other parts of the world.

Nazario is the author of the 2006 book “Enrique’s Journey,” which follows the story of a 17-year-old Honduran boy making the long and dangerous journey to the southern U.S. border—the same journey tens of thousands of children are now making.

She condemns politicians for using children as “punching bags,” as well as President Barack Obama for attempting to expedite their removal, saying, “We need to see these kids not as an immigration issue but as a refugee issue.”

In September 2011, Nazario spoke at an event at SUNY Old Westbury. At the time, she spoke to Long Island Wins about why children would make the incredible journey north:

A lot of these children symbolize to me incredible determination… I think Americans don’t understand this kind of determination. If they saw what I saw, they would realize that no wall is going to stop a child who is this determined to reach the United States, whether it’s to make money to help his family or it’s to reach his mother who he hasn’t seen.

In her interview with Stewart, she mentions that, in the past, the U.S. has offered to help refugees from Cuba, Haiti, and elsewhere in the world. “There have been extraordinary moments in our history where we have stood up and done the right thing and we need to do that here,” she said.

You can see the full clip below.