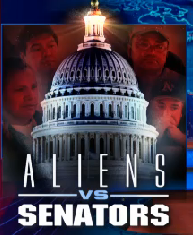 With immigration reform up for debate in the Senate, the television news programs have been discussing this important issue regularly. Whether it’s the Sunday morning talks shows or the weekday late night satirical programs, immigration reform is front and center.

The Daily Show, which is usually hosted by Jon Stewart, is currently being presented by John Oliver, himself an immigrant from England. The program has been covering immigration reform in recent weeks, taking humorous angle on this issue. Here is a clip from an episode this week: