Scroll to the bottom for all of The Immigrants’ Civil War.

General Benjamin Franklin Butler may have been the third most hated man in the Confederacy. After Abraham Lincoln and William T. Sherman, Butler was reviled more than any other Union leader. While he is little known today outside the world of military historians, he was once internationally famous as “The Beast Butler.” He was also the man most responsible for winning New Orleans’ immigrants over to the Union side in the Civil War.

General Ben Butler was not a West Point graduate. In fact, before the Civil War he was not even a soldier. Yet within a year of the Confederate attack on Fort Sumter, he would be a major general commanding a large Union army in one of the most successful operations of the war. What made Butler a key to converting New Orleans from the first city of the Confederacy to a Union stronghold wasn’t his knowledge of military science, which was virtually non-existent, but rather the tactics he learned as a Democratic street politician.

Ben Butler’s father died from yellow fever before Ben was born. His now-single mother took him and his two siblings to live in Lowell, Massachusetts, where she ran a boarding house. Lowell was America’s first industrial city and it was filled with farmers’ daughters looking for work, as well as with new immigrants, who would soon form the backbone of America’s working class. Butler developed an easy familiarity with the type of people he would rely on for support in New Orleans.1

In the 1840s, Butler served as a lawyer representing “factory girls” who were blacklisted by wealthy mill owners for standing up for their rights. He soon moved into local Democratic politics where he took on the mill owners on behalf of women who couldn’t even vote. Ben Butler also ingratiated himself with the Irish and other immigrant workers arriving in Lowell.2

By the end of the 1840s, Butler tried to combine working class Democratic politics with the anti-slavery agitation of the emerging Free Soil movement. Butler hoped to rally workers around a demand for a 10-hour work day at a time when it was common for factory hands to work 60 to 70 hours per week with no overtime pay. Lowell factory owners tried to retaliate by posting signs warning that any workers voting for Butler’s coalition would “be discharged” from work. Butler publicly fought this new threatened blacklist and forced the rich men to back down. He also compelled the Massachusetts legislature to limit the hours of work.3

During the 1850s, Butler continued to occupy the left-wing of the Democratic Party. He fought against the anti-immigrant Know Nothings who dominated the politics of Massachusetts in the middle of the decade. Even though he was a militia officer and under the jurisdiction of the state’s Know Nothing governor, he refused to follow orders discriminating against the foreign-born. Ben Butler also argued that the rich should bear a fair share of the tax burden and provide the resources for projects to relieve the suffering of the poor, stands that made him popular with the emerging immigrant working class.4

Butler was a strong advocate for immigrant rights. He mocked the notion that any white man born in the United States could vote, but that equally intelligent and honest people born in other countries could not vote until they cleared a bunch of arbitrary hurdles erected by the states. Butler argued that any man legally residing in the United States should be allowed to become a citizen.5

While Butler’s positions on race were amazingly inconsistent before the war, in 1861 he became the first Union general to essentially free slaves that fled to Union camps. Butler said that since the slaves’ work helped the Confederacy, that escaped slaves who did Confederate work were “contraband” of war and that Union soldiers must not return the escapees to their “owners.”6

When Union forces took control of New Orleans at the end of April 1862, Ben Butler was their commander. He encountered a city where Unionist civilians faced violence at the hands of Confederate backers, and where a Know Nothing mayor apparently allowed anti-immigrant terror-squads to intimidate the nearly 40 percent of New Orleanians who were foreign born.

In that city, pro-Confederate civilians were so bold that white women spat in the faces of Union officers, poured human excrement on patrolling Union soldiers, and, in one notorious case, poured urine on Admiral David Farragut, the Union Navy commander. Confederate women even disrupted the funerals of dead United States soldiers.7 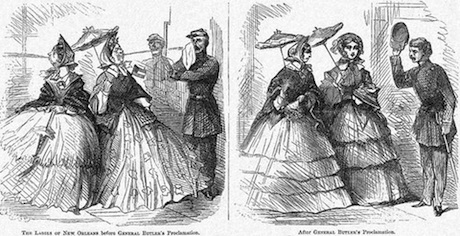 To combat the Confederate sympathies, Butler issued his infamous Order #28, saying that women who harassed his men would be treated as streetwalkers and the attacks stopped. But Butler still had to find a way to protect the Union stronghold in New Orleans—which was isolated and surrounded by the Confederate states of Texas, Louisiana, and Mississippi—from Confederate armies and from a pro-Confederate uprising. Order #28 might stop spitting, but it wouldn’t stop a determined rebel force from taking over the city. For allies, Butler turned to the city’s immigrants, blacks, and working men.8 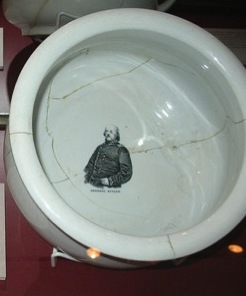 During the early weeks of the Union occupation of New Orleans, white women who sympathized with the Confederacy reportedly dumped chamber pots filled with urine on the heads of Union soldiers. When General Ben Butler issued an order calling for the arrest of any woman who defiled his soldiers, chamber pots with his picture in them were sold to pro-Confederate women to allow them to urinate on the Union General’s face without risking arrest. These Ben Butler chamber pots were popular across the South. (Source: WillEckrich via Flickr)

6. Mutiny at Fort Jackson: The Untold Story of the Fall of New Orleans by Michael D. Pierson, University of North Carolina Press (2008) p. 158.

7.  “’The Unmeaning Twaddle About Order 28’: Benjamin Butler and Confederate Women in Occupied New Orleans, 1862” by Jacqueline Campbell in The Journal of the Civil War Era Vol. 2, No. 1, March 2012.

8. “’The Unmeaning Twaddle About Order 28’: Benjamin Butler and Confederate Women in Occupied New Orleans, 1862” by Jacqueline Campbell in The Journal of the Civil War Era Vol. 2, No. 1, March 2012.