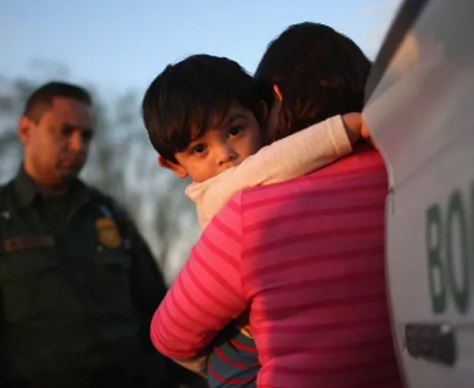 President Trump just signed an executive order that children and parents detained at the border be jailed together. It is a sad state we are in when that is an improvement. At least little children and babies will not be taken away from their moms. We hope.

The announcement comes the day after former Trump adviser Corey Lewandowski responded to a story on Fox News about a 10-year-old girl with Downs syndrome who had been taken from her mother and put in a cage with the words “Womp womp,” every twelve year old’s code for “Big Deal.” “Who cares?” had been the response of Team Trump all along to the suffering of children.

Lewandowski was not the only one with a compassion gap yesterday. Trump himself worried publicly that immigrant children would soon “infest” the country. He had earlier referred to immigrants as “animals.” Now we know the kinds of animals he thinks that they are.

Today, Trump told reporters “We’re going to be signing an executive order in a little while…We’ve got to be keeping families together.” At 3:30 PM word came that he has done so.

I welcome this announcement, although I will reserve judgement on the order itself until I see its implementation. The executive order does raise some issues.

First, Trump said that he was not responsible for splitting up the families. He told reporters over and over that family separation was required by the “Democrat law.” His Homeland Security Chief Kirstjen Nielsen on Sunday had Tweeted that “We do not have a policy of separating families at the border.  Period.” She went back on that statement a day later by insisting that separation was, as Trump had said, required by law. If it is required by law, how can the president change the policy? You can’t change a law with an executive order.

Secondly, how are Trump’s supporters, 55% of who favor splitting up families, going to respond to this flip flop? These are people who have contacted me repeatedly this week to tell me that they support family break-up because the refugee children and their parents are “criminals.” Many also tell me that they have been denounced as racists and fascists by their neighbors and family members for their stance. Now that the president has turned on them, publicly acknowledging that this was wrong to do, how will they react?

It is crucial that public criticism of Trump’s refugee and asylum policies continue. Sessions and Trump still intend to deny asylum to victims of gender-based violence and to those fleeing gangs. These new cruelties were virtually ignored by the media since the images of children in detention dominated the news. We can’t let Trump’s circus today lead us to turn a blind eye to these further assaults on immigrants.