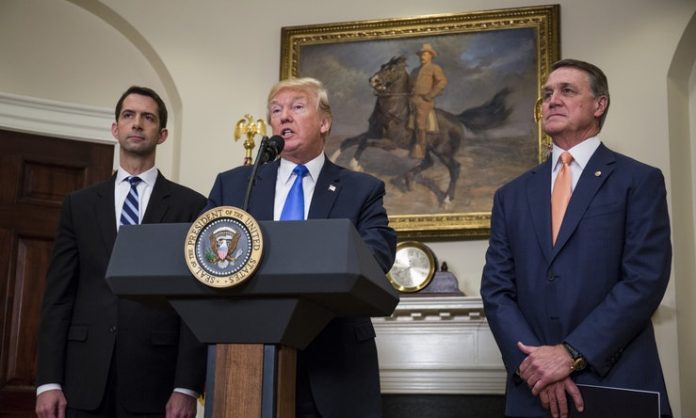 At the White House yesterday, the trio described their proposal as so-called “reform.” They said the measure would shift legal immigration to a point-based merit system to promote a flow of immigrants the administration deems worthy, rather than one based on “chain migration” that aimed to keep families together.

Points would be accumulated based on criteria including education, job offers and skill sets.

The proposal would restrict legal immigration along several lines, including chopping green card issuance by half, from 1 million to 500,000.

The RAISE Act also would deal a blow to families by cutting reunification visas for parents of U.S. citizens, their adult children, as well as siblings of citizens, effectively curtailing a citizen from sponsoring anyone other than their spouse or minor children. It would, however, create a temporary renewable visa for elderly parents for “caretaking purposes.”

Further, it would end the diversity visa program, harming Africans and Caribbean immigrants with little opportunity to come here to begin with.

The bill would also cap refugee admissions at 50,000.

Angelica Salas, executive director for the Coalition of Humane Immigrant Rights, said in a statement that the RAISE Act will never become law because it is “anti-American, anti-worker and anti-immigrant.”

“President Trump has openly paired up with the nativist, white supremacist movement to revive a decades-old, point-based proposal to severely limit legal immigration, keep families from reuniting, and deal a severe blow to American workers and our nation’s economy,” Salas said.

Cotton and Perdue initially introduced the first version of the bill back in February.

Though the bill’s alleged aim is to help American workers, commentators have already proven the idea is not rooted in reality. Study after study has already shown that immigration, regardless of status, is positive for the economy and serves to complement, rather than replace the American worker.

For instance, the Cato Institute has found that the legislation would actually drive down wages across all levels, including for low-skilled workers, a main demographic the bill is apparently designed to help.

In January, Alex Nowrasteh of the Cato Institute broke down Cotton’s arguments he made just before his first time trying to get the RAISE Act passed. He attempted to suspend disbelief, assuming a scenario where wages would actually rise for Americans with less than a high school degree if undocumented immigrants were deported and future legal immigration was limited.

“Foreigners will then have even more of an incentive to sneak in illegally to work, overstay visas, or find other ways to circumvent American labor market regulations,” Nowrasteh wrote.

For Long Island, this would have a devastating impact on our local economy by impacting industries like wineries, farms and hospitality. This is an issue that Long Island Wins will explore in the near future.