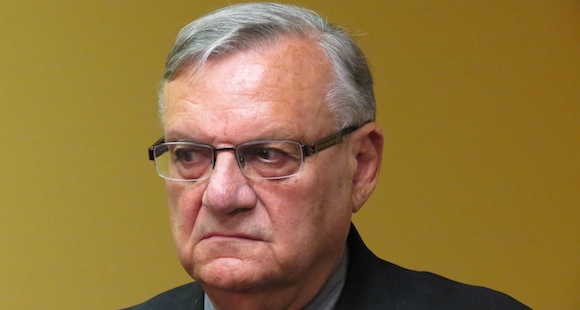 Donald Trump issued a press release tonight saying that former sheriff Joe Arpaio is pardoned for his conviction for criminal contempt of court. Arpaio was convicted of criminal contempt after he repeatedly violated a Federal District Court Order that he cease immigration round-ups in which he racially profiled Latinos for traffic stops leading to their arrests.

Trump’s pardon came before the judge hearing the case even passed sentence. The pardon was rushed after Trump promised to pardon Arpaio at a political rally in Phoenix, Arizona earlier in the week. The president followed none of the ordinary procedures for pardons, and reportedly excluded Justice Department lawyers from the process.

The White House statement announcing the pardon made no mention of Arpaio’s violations of the rights of Latinos and immigrants that led to his original trial, nor did it discuss his actions in defiance of a court order. Instead, it lauded his “years of admirable service.”  Trump also praised him for his work against the “scourges of crime and illegal immigration.” Unlike most pardons which discuss the pardonee’s remorse and rehabilitation, this pardon reads more like a testimonial to the willingness of Arpaio to defy the courts and the Constitution.

Arpaio’s pardon is essentially a reward for his illegal activity. It sends a message to law enforcement officers around the country that violating the Constitutional rights of Latinos carries little risk of criminal prosecution. As long as their acts are outrageous enough, the president will pardon them.

The pardon is also part of Trump’s love-affair with the Alt-Right. Arpaio’s willingness to target Latinos has long made him a hero to White Supremacists throughout the country.