President Donald Trump exploited yesterday’s terrorist attack in New York City to attack the Diversity Visa program. Of course, he did not do so in a policy paper, he did it in tweets. 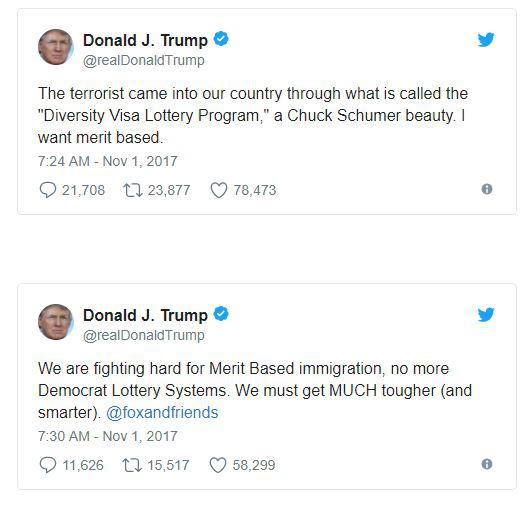 The Diversity Visa program allows 50,000 people per year to enter the United States if they are selected in a worldwide lottery. The winners have to clear all of the vetting required of other applicants for permanent residence, the same vetting that would apply to folks allowed in under Trump’s misnamed “merit-based immigration.”

So, there really would be no difference in the security profile of those coming in under the Diversity Program or under Trump’s program. In this case, Trump’s security claim is a red herring designed to distract.

While Trump’s terrorism-based attack on Diversity Visas is nonsense, several readers have asked me about what the program is and why we have it.

Diversity Visas have their root in the 1980s when Congress passed the first visa lottery aimed at legalizing undocumented Irish immigrants living without authorization in the U.S.

When the program was set to expire, Congress passed new legislation, signed by George H.W. Bush, that substituted the new Diversity Visa program for the expiring Irish visa program. Under the new law, people from “low immigration” countries can submit their names for the visa lottery if they meet certain educational and security requirements.

People from Bangladesh, Brazil, Canada, China (mainland-born), Colombia, the Dominican Republic, El Salvador, Haiti, India, Jamaica, Mexico, Nigeria, Pakistan, Peru, the Philippines, South Korea, the United Kingdom (except Northern Ireland) and its dependent territories, and Vietnam may not apply because these countries already have relatively high rates of immigration to the United States. Also, Congress decided to set the number of visas for Latin American visas far below those for Europe.

The reality falls in the middle. In 2015, for example, 14 million people entered the lottery for 50,000 visas. 46 percent of the winners were from Africa, 32 percent from Europe, 16 percent from Asia, 3 percent from Latin America, and 3 percent from Oceana (mostly from Australia and New Zealand).

The program has increased immigration from Europe and it has helped people from Africa to immigrate who could not in the past. Like all areas of immigration policy, this program should be discussed as to whether it is the best way to allocate 50,000 visas each year, but trying to focus the debate on terrorism is just detestable fear-mongering.