One cent doesn’t seem like much, but for some people – like the farm workers in Immokalee, Florida, who grow tomatoes for Trader Joe’s – a single penny can have a huge impact.

They’re only asking for one cent more, but Trader Joe’s won’t listen. That’s why the NYC Community Farmworker Alliance organized the Race for Justice outside a Trader Joe’s store in Manhattan’s Union Square on August 5: We wanted to spread the message that if Trader Joe’s pays one cent more for each pound of tomatoes, they will be able to improve worker salaries and eliminate slave-like conditions and abuses in the fields.

Ninety percent of the fresh tomatoes produced in the US come from Florida and the industry conditions have exploited workers for decades. Still, Trader Joe’s refuses to join the Fair Food program, which asks companies to pay one cent more per pound of tomatoes, accept a code of conduct for employers, and include workers in labor negotiations. 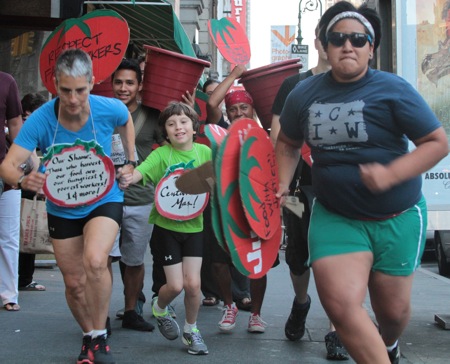 The Race for Justice outside the Union Square Trader Joe’s store on August 5.

The Coalition of Immokalee Workers was also at the rally in Union Square, visiting New York as part of a tour of Trader Joe’s stores in the Northeast. I spoke with one of their members, Oscar Otzoy, about the Fair Food program and Trader Joe’s:

AG: What role have corporations played in exploiting farm workers?

OO: Because of the way they do business, corporations like Trader Joe’s have been responsible for the stagnating salaries of farm workers. Workers make 50 cents per collection bucket – that’s 32 pounds of tomatoes – a salary that hasn’t changed since 1980. The purchasing power of a corporation allows them to buy tomatoes from the farmers at a very low price. In turn, the farmers pressure the contractors to work more cheaply, and the contractors pressure the workers, paying them a low salary and consigning them to difficult living conditions.

The farm workers aren’t entitled to paid vacation, benefits, or even the basic protections that all workers should have. And it’s no accident that labor reforms since 1930 haven’t changed any of this.

AG: What does the Fair Food program consist of?

OO: The Fair Food program includes a code of conduct for corporations and fair wage demands – workers want one cent more for each pound of tomatoes that companies buy directly from the farmer, to give them a fair wage. They also call on the companies to institute a code of conduct that has zero tolerance for slave-like conditions and the sexual harassment that women confront on the job. Most importantly, it demands that the voice of the worker also be present at labor negotiations.

We’ve succeeded in bringing nine corporations to the table and getting them to sign the agreement, including Taco Bell, McDonald’s, Burger King, Subway, and Whole Foods. Workers harvesting tomatoes for those companies know that they’re receiving the additional cent per pound because it appears in their checks noting that it is part of the Fair Food program.

Trader Joe’s says that they’re already making a contribution, but it’s not part of our program. That’s why we’re issuing this call to action. 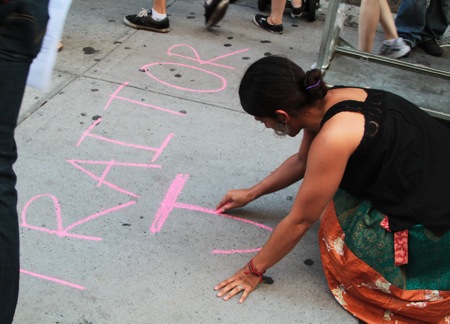 AG: After 10 years of a perseverant campaign, what changes have the workers seen in the fields?

OO: One of the surprising results is that now companies are offering shaded areas in the fields. Before we just sat down in a ditch to rest or have a drink, but now companies like Pacific – which grows tomatoes – have added tables, shade, and water for workers who are eating or resting.

The code of conduct for employers has also helped workers. Now workers can address injustices without being fired. It’s also common for farm workers to get robbed of their wages, and this is changing.

The program is transforming family life, too. The workers aren’t going to look for work at four or five in the morning; now they arrive in the fields at 8:30 or 9am and punch a timecard. If a worker doesn’t earn the state’s minimum wage over the course of a week, the company will pay at least that much. So for workers this is a big plus.

The Coalition of Immokalee Farm Workers and the Fair Food program have succeeded in getting big corporations to recognize the role of modern-day slavery and continue fighting to get Trader Joe’s to join them at the bargaining table.

Click here to watch a video of the Race for Justice in Union Square.