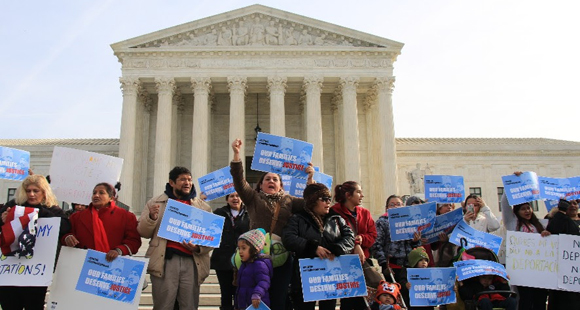 Below are three key points outlined by America’s Voice, about last week’s Supreme Court 4-4 split decision on DACA+ and DAPA.

2. The legal fight is not over and this ruling should not be the end of this case: The Obama administration and the states hurt by Texas’ action should do everything in their power to rein in Judge Hanen and limit his preliminary injunction to just the 5th circuit states of Texas, Louisiana, and Mississippi while allowing the executive action programs to proceed in other jurisdictions throughout the nation.

3. The politics behind U.S. v Texas is now clearer and more consequential than ever: U.S. v Texas has always been a political dispute. Yet the 4-4-split ruling heightens and makes even more overt the political nature and stakes associated with the ruling. For millions of immigrant voters and allies, November’s elections mean a referendum on the future of immigration actions and the chance to fill the Supreme Court vacancy with a Justice who could break the partisan stalemate and help deliver relief to millions of families in the process.