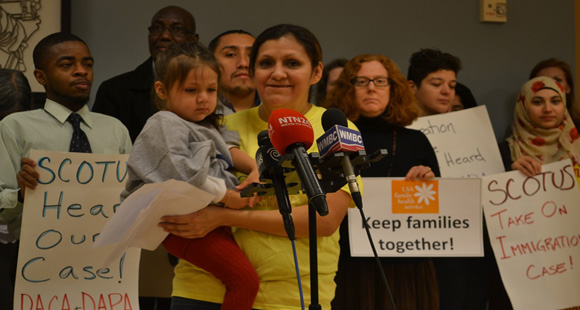 The United States government needs to better address the root causes that makes millions of Central American families cross the southern border to the U.S. every year looking for a better life and opportunities.

Recently, the Department of State issued a warning to Americans not to travel to El Salvador, Guatemala and Honduras because they consider these countries dangerous.

For the U.S. to recognize the extreme violence affecting this region is a step forward but is not enough, according to experts during a press conference last week convened by Alianza Americas, a coalition of U.S.-based immigrant organizations. This only confirms the suffering that Central Americans and refugees have known for years, the experts agreed.

“We are indeed dealing with a humanitarian crisis in Central America. And it is one that we are not responding appropriately to. Instead, we are rounding people up and sending them back,” said Oscar Chacon, Executive Director for Alianza Americas.

A delegation of labor leaders from the AFL-CIO (American Federation of Labor and Congress of Industrial Organizations) went to Honduras a year ago to meet with union leaders. They corroborated the crisis that is affecting this country.

The U.S. is required to shift its foreign policy measures in the region to focus on job creation, meaningful protection of labor and human rights to reduce the factors that drive refugees from their homelands, explained Lopez.

“The U.S. approach to this situation must address the causes of such large-scale displacement including the long-term impact of U.S. policies on immigration, trade, development and foreign affairs,” Lopez said. “If our government does not play a constructive role to reinstate rule of law and human rights protection in Honduras, we are going to continue having this event year after year,” she said.

But these social and economic struggles worsen the uncontrollable levels of violence that make people from El Salvador, Guatemala and Honduras, live in fear and flee their homeland. In 2015 El Salvador became the murder capital of the world with a 70 percent increase in homicide rates. Approximately 6,500 Salvadorans died last year with a rate of 18 homicides a day, according to news agencies. Also, Honduras registered the largest rate of female homicide followed by El Salvador, and in Guatemala the homicide rate is the fifth largest in the world.

In El Salvador “we are getting the same dead rates that we had during the cruel civil war we went through in the 80s. The only difference is that now it is not about political violence, it is criminal violence executed by gangs,” said Carlos Dada, former editor of El Faro newspaper in that country. The gangs control territory, Dada said, which means “they control the movement of the people, and you may die just because you cross an imaginary border.” “They control schools, control transportation,” he said.

There are approximately 20,000 police officers in El Salvador in contrast from approximately 15,000 gang members, according to Dada.

“In a lot of neighborhoods we have hundreds of thousands of people living under the rules of crime organizations. The sate cannot guarantee the safety of the population,” Dada said.

The high homicide rates in El Salvador, Guatemala and Honduras have turned violence in these countries into an epidemic, according to Elizabeth Kennedy, a researcher at San Diego State University. Likewise, the impunity rate for these countries is out of control. Over 95% of homicide cases are never solved, acquitted for other crimes or similar to the crimes that were reported, Kennedy explained.

“This is because the governments in these countries are unable or unwilling to protect their citizens,” Kennedy said. “The governments can’t do nothing, would do nothing or are collaborating with criminals,” she said.

In 2015, the Obama administration requested from Congress more than $750 million as economic aid for El Salvador, Guatemala and Honduras, as part of the Alliance for Prosperity plan, intended to promote regional economic integration, increase safety, and improve governability in the Northern Triangle region. The idea is that helping these countries to be economically stable and provide safety to their citizens, it would decrease the number of Central American immigrants coming into the U.S. The U.S. has already started to distribute that money.

“We have an obligation to respond to both, an humanitarian crisis and to the immigration crisis that keeps 11 million undocumented workers in the shadows,” Lopez said. “It requires a humane lawful response that should not be politicized.”