On March 8, 1862, a massive Confederate ship, clad in iron armor, steamed into view of the Union blockade squadron near Newport News, Virginia. By the end of the day, the ironclad had sunk two of the largest wooden ships in the Union Navy and forced two other to run aground. The new battleship, christened the “Virginia” by the Confederates, was built on the base of a captured Union ship called the Merrimac. On March 8, the Merrimac appeared to be the most powerful naval vessel in the Western Hemisphere.

Confederate hopes for the Merrimac were so strong, that the Confederate Secretary of the Navy wrote to the ship’s captain asking him if he could “sail to New York and attack and burn the city” after destroying the navy along the Virginia coast. The Navy Secretary fantasized that the Merrimac could “shell and burn…the Brooklyn navy yard” and destroy the “lower part of the city.” He predicted “bankers would withdraw capital from the city,” which would be “a blow from which the enemy could never recover.”1

On March 9, the Merrimac steamed out to finish off the Union squadron. A small vessel, it appeared to be a barge or raft, moved to block the Confederate ship twice its size. The Union ship, the Monitor, had arrived off Newport News from Brooklyn the day before, just as the battle was being fought. On that day, it would engage in one of the most important battles in naval history.

Not all of America’s immigrants were day laborers, small farmers, or political refugees. In 1862, as now, some were scientific or technological geniuses who brought the latest innovations from around the world to our country. John Ericsson was the immigrant high-tech wizard behind the ship that would save the United States Navy.

Ericsson was born in Sweden, where he learned engineering from his father. While he was in his twenties, he immigrated to England. There he built the fastest train in the world, capable of speeds over 65 miles per hour all the back in 1829. He soon turned his talent to designing ships.2

Steam-powered ships were a relatively new invention. Most ships were still equipped with sails because steam power was expensive and unreliable. Steam ships were driven by paddle wheels, which were an incredibly inefficient means of propulsion. A paddle wheeler had to carry enormous quantities of fuel, limiting space for cargo and passengers. Ericsson designed the screw propeller as a replacement. This was one of the ancestors of the modern propellers used today on everything from speedboats to supertankers.3

Ericsson introduced the propeller to the United States when he immigrated to New York in 1839. He saw it as particularly useful in naval ships. A paddlewheel was extremely vulnerable in battle. Shoot away the huge paddlewheel, an easy target, and the ship was a sitting duck. Put the means of propulsion under water as a propeller and you made it almost impossible to hit.4

While Ericsson originally came to the United States to make a fortune, after the failure of the Revolutions of 1848, he decided to become a US citizen. Still, he had doubts about his new country’s ethical core. His authorized biography says that Ericsson “was hostile to slavery from the beginning and was accustomed to say that he could conceive of nothing meaner than the desire of one man to live off the toil of another.”5

When the Civil War broke out, the U.S. Navy was still made of wood and heavily reliant on sails. It was only when the navy found out that the industrially weak Confederates were building iron-armored ships that the Union followed suit. Industrialist Cornelius Bushnell had a design for an ironclad ship that he brought to Ericsson for review. Bushnell later recalled that after looking over the plans, Ericsson took out an “old dusty box” in which he had a small model of a ship design. The Ericsson ship was the opposite of older designs.6

John Ericsson’s plans for the Monitor.

Ships had steadily become larger to become more powerful. Power was equated with the number of cannons a ship could carry. More cannons required more men to man them. Crews numbered in the hundreds. Ericsson’s ship was to have only two cannons, which allowed it to be crewed by just a few dozen sailors. Small, with its propeller and most of its quarters underwater, it would be a tough target for an enemy to hit. The two cannons were to be mounted in a steam-powered turret that could turn 360 degrees, a revolutionary innovation. “It was less than ten minutes before I fully awoke to the fact that salvation was in store for our government and country,” Bushnell said.7

Ericsson built the Monitor in 100 days.

On March 9, 1862, the Monitor repeatedly fought off the Merrimac, even though the Confederate ship was twice as large with more than five times as much firepower. The huge cannon shot of the Merrimac simply deflected off the round iron turret of the Monitor.

The Confederate Merrimac returned to its dock that night and would never take another victim.

After the war, Bushnell wrote to Gideon Welles, Lincoln’s Navy Secretary, “I am confident that no native-born child of this country will ever forget the proud son of Sweden.”8 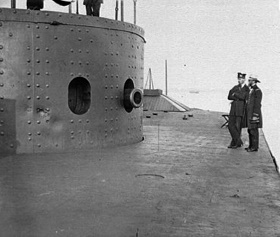 The Monitor after the battle; dents to the turret (left) are from the Merrimac.

Appendix
The battle between the Monitor and the Merrimac immediately made its way into popular culture.

Just a few months after the naval battle, the American songwriter Stephen Foster incorporated a tribute to Ericsson into his song “That’s What’s the Matter”:

You can visit New York’s tribute to John Ericsson in Battery Park.

6. The Original United States Warship “Monitor” published by the Bushnell National Memorial Association (1899) p. 24; The Building of “The Monitor”  by John Ericsson in Battles and Leaders of the Civil War Vol 1 pp. 730-745.