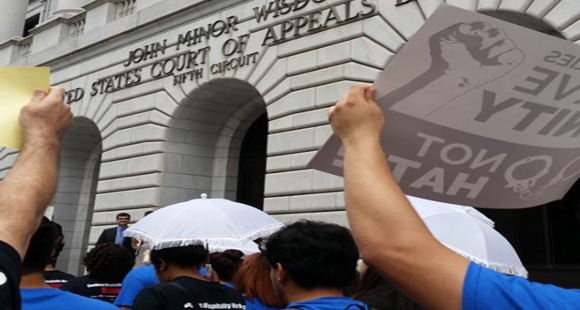 The United States Department of Justice, DOJ, announced Tuesday that it disagrees with the decision made by the Fifth Circuit Court to impose an injunction blocking the implementation of DAPA and the expansion of DACA, and that it will take the case to the Supreme Court.

On Monday, the Fifth Circuit Court of Appeals, in New Orleans, decided to reject an appeal on its previous decision to keep President Obama’s administrative relief programs on hold. But the DOJ is hoping the Supreme Court can overturn that decision.

“The Department of Justice remains committed to taking steps that will resolve the immigration litigation as quickly as possible,” DOJ speaker Patrick Rodenbush said in a statement. “The Department disagrees with the Fifth Circuit’s adverse ruling and intends to seek further review from the Supreme Court of the United States.”

The expansion of DACA and the new DAPA program are part of the executive orders announced by Obama in November 2014. They would benefit approximately 5 million undocumented immigrants, including about 33,000 on Long Island, by allowing temporary protection from deportation and granting temporary work authorization renewable every three years to legally work in the United States.

White House press secretary Josh Earnest said during a press conference Tuesday that the Obama administration still believes in the legal arguments in favor of the measures.

In February, a federal district court in Brownsville, Texas, issued a ruling temporarily blocking President Barack Obama’s administrative relief programs, after a coalition of 26 states, under the leadership of Texas, introduced a lawsuit in that court. Those states against the measures say the deferred action programs are unconstitutional and could make their cities less safe. The Department of Justice filed an emergency motion of stay pending appeal back in March to the Fifth Circuit Court of Appeals.

DACA has been protecting undocumented youth from deportation since 2012 when it was first implemented. So far, it has helped half a million young immigrants who came to the United States before the age of 16 and were in the country before 2007. They were able to get driver’s licenses and better jobs so they can improve their lives and contribute to their communities.

The original DACA, which is still in effect, is valid for two years. The extension of DACA would be renewable every three years, and would benefit immigrants that arrived to the U.S. before the age of 16, who have been here before 2010, with no maximum age limit.

DAPA is the new deferred action program that would benefit parents of legal permanent residents or U.S. citizens, who have been living in the country before 2010.