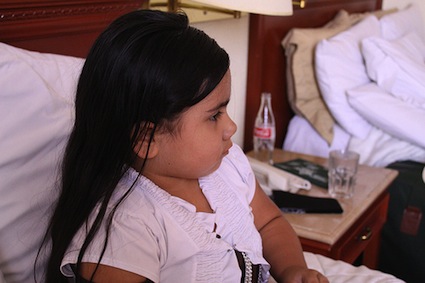 Emily Ruiz is back with her family in Brentwood, but the story of the 4-year-old Long Island girl sent to Guatemala despite being a US citizen is still attracting the attention of media outlets in the US and abroad.

The first wave of coverage peaked when Emily’s lawyer, David Sperling, flew to Guatemala City with two staffers to bring the girl back to her parents in Brentwood.

I also flew to Guatemala and was given exclusive access to meet Emily and her family. As a result, the video and photos that I shot were picked up by several outlets, most notably CNN, CNN International, and CNN Español, which have a combined viewership of roughly 300 million people.

We don’t have stats on exactly how much of that audience saw our footage on CNN, but the safe answer is “a lot.” Here’s a Spanish-language version of the segment.

The day after I arrived in Guatemala, Emily flew back to New York and was reunited with her parents, but I stayed behind to look for cases similar to that of Emily.

Sadly, they weren’t hard to find.

I made my way to a small village a few hours outside Guatemala City, where I met over a dozen US-citizen kids who were living in exile abroad, consigned to the limitations of their parents’ immigration status.

While I was in Guatemala, I posted a preview of the story, and based on that preview, Telemundo decided to pick up our footage and create their own Spanish-language story around the phenomenon. The Telemundo segment aired nationally at 6:30pm on April 7 (I’m still editing my video, but should have the full story by the end of the week).

The broader repercussions of how Emily was treated have been the subject of other mainstream news segments, including a segment on Latina USA, an NPR program with María Hinojosa.

What’s clear from the news coverage is that Emily’s situation is more than just a single incident; it speaks to the pervasive problem of families being torn apart by our immigration system, and the children who suffer as a result.