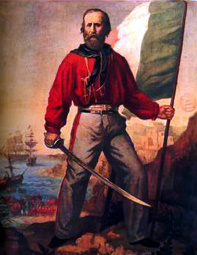 For a full list of articles in The Immigrants’ Civil War scroll to the bottom of the page.

Giuseppe Garibaldi was the 19th century’s rock-star revolutionary. He had participated in liberal revolts in Uruguay, Brazil, and his native Italy. He commanded Italian republican forces against Austrian, French, Spanish, Neapolitan, and Papal armies. He was a romantic figure lionized on three continents.

What is sometimes forgotten is his close connection with the United States.

When foreign armies crushed the Italian republican forces after the Revolution of 1848, Garibaldi fled first to the mountain Republic of San Marino and then to the United States. Here, he was welcomed by the small Italian exile community and supported himself as a candle maker on Staten Island, where his cottage is preserved as a historic site.

Here, Garibaldi made valuable contacts with New York liberals who would later support his efforts to unify Italy.

In 1860, Garibaldi was at the height of his fame. He had raised a strong nationalist army and had defeated most of the anti-republican forces in Italy. His renown was so great that in 1861, he would be offered a generalship in the Union Army. Garibaldi saw Abraham Lincoln as a kindred spirit, but he told the Americans that he would only come to America if the principal war aim of the north was the abolition of slavery.

Garibaldi was so associated with Lincoln in the public mind that when Lincoln was assassinated in 1865, Garibaldi received many notes of condolence as though he were a brother of the slain president. Garibaldi’s own grandchild, born during the war, was named “Lincoln.”

While Germany and Ireland would supply the largest groups of foreign-born soldiers to the Union Army, Italian immigrants wanted to be represented in the Union cause with a regiment of their own. In the weeks after the attack on Fort Sumter, New York’s tiny Italian community, numbering only a few thousand, tried to recruit a regiment in honor of Garibaldi. Even if every Italian man of military age in the city had joined it, there would not have been the necessary 1,000 men to fill the regiment, so the organizers decided to form a legion of exiled liberals.

The idea was to form a unit based on allegiance to Garibaldi’s ideas of republican democracy and opposition to slavery that would attract men who immigrated to America to seek freedom. The regiment would be organized into 10 companies of approximately 100 men each, with each company having a distinctive national identity.

Three companies consisted of Germans, three of Hungarians, one of Swiss, one of Italians, one of Frenchmen, and one was called the “Spanish Company” – even though many of its volunteers were actually from Latin American countries like Cuba, Chile, and Nicaragua – and others were from Portugal. In each of these companies, the native language of the troops was used as the language of command.1 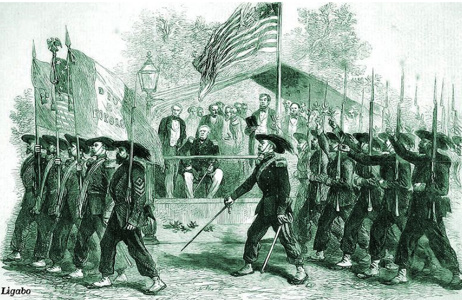 The Garibaldi Guards paraded past Abraham Lincoln in 1861 with its Italian Revolutionary flag emblazoned with the Italian slogan “For God and the People.”

The patriotism of these immigrants was not always appreciated. As the Garibaldi Guards regiment was recruiting, the New York Herald asked if it would be made up of organ grinders. The volunteers’ “dual loyalties” were called into question as they left New York carrying the American flag, the Hungarian flag, and the Italian revolutionary flag inscribed with the slogan “Dio E Popolo” (“God and the People”). At the flag presentation ceremony in New York, the band played the Marseilles.2

In an article published on May 29, 1861, The New York Times treated the regiment sympathetically, but engaged in a racial stereotyping that is painful to read today:

In olden times, when the Latin races poured forth their thousands to punish the infidel, history recorded their progress and their career of glory gave birth to a new word—Chivalry. Today, when the stake is greater than it was then, and when the word is in danger of losing its significance, we find the descendants of these heroic peoples true to their historic fame. Once mere they have buckled on their armor to succor the distressed, to rescue the helpless from captivity, to avenge a grievous wrong to the civilization of the age, and to make a name in the brilliant pages of the only pure history in the world. It is the privilege of the Garibaldi Guard to renew the great traditions of the several nationalities of which it is composed. Those who saw the noble battalions, as they filed down Broadway yesterday, cannot doubt the manly strength that will do this. A finer body of men has not left the City. The majority have seen service in other fields; know what war means, and would not, except from that sense of duty which makes all men heroes, renew its horrors. But the cause for which they now fight is their own cause.3

A modern re-enactor in the uniform of a sergeant of the Garibaldi Guards.

The departure of the Garibaldi Guards was a source of great pride to the small, but growing, Southern and Central European immigrant communities in New York. The New York Times reported on the men marching off to war at the end of May 1861:

They were hailed with a storm of applause. The good word was thrown to them as a blessing in all the languages of Europe; and flowers, too, to remind them of the tender ones they have left at home…the enthusiasm was tremendous. A regiment so peculiarly constituted has infinite ramifications, and the warm Southern elements it represents gushed forth yesterday as it has never done before in this City.4

The only problem for the new regiment marching off to war was that “there were but 100 muskets” for the nearly 1,000 soldiers. The New York Times, however, assured its readers that “[o]therwise the Garibaldians, were equipped superbly.”5

The regiment included women, called vivandieres in the European tradition, who were in charge of organizing support services for the soldiers. “Six vivandieres marched bravely in the ranks,” the Times reported. These women wore uniforms patterned on the uniforms of the men, and after the war they would be considered by their comrades to have been full military veterans.6

Since women were not even allowed to serve as nurses with the United States Army at the start of the war, their presence with the Garibaldi Guards excited notice in at least four newspapers. A Washington paper took time to describe their uniforms:

“The uniform of the vivandiere is the Garibaldi hat of the Regiment, a red flannel basque, a blue skirt and black laced gaiters of the regiment.”7

A vivandiere, although not from the Garibaldi Guards.

The usually snide New York diarist George Templeton Strong saw the Guards during a visit to Washington. Describing them as “swarthy Italians and Hungarians,” he nevertheless admitted they were a “very promising corps” of men.8

The Garibaldi Guard would see tough service during the war. It would also suffer from ethnic discrimination and its colonel would be accused of corruption. It is one of the units that we will follow over the next four years in The Immigrants’ Civil War.