This article is part of The Immigrants’ Civil War. Scroll to the bottom for a complete description of the series.

Bertram Korn, rabbi and scholar of 19th century American Jewish history, observed a half century ago that most American rabbis during the months leading up to the Civil War were notably quiet on the issue of slavery.1

While Jews had settled in America during the early years of the colonial era, those tiny Jewish communities were mostly small collections of Sephardic merchants. Mass Jewish immigration only began after the failure of the European Liberal Revolutions of 1848, which marked a setback for Jewish equality.

European Liberals had advocated a secular state in which Jews would be treated the same as other citizens. However, when Prussia and Austria crushed the liberal movement, it dashed the hopes of many Central European Jews for full citizenship.

Worried about their future in the German-speaking lands, many Jews began to look to America as a new home. In fact, two-thirds of Jews living in the US on the eve of the American Civil War were recent immigrants. Nearly all of these immigrants were German-speaking.

Jewish communal leaders, worried about provoking an anti-Semitic reaction against their exposed congregations, tried to keep a low political profile in an America increasingly prone to explode in political violence. They were religious refugees in a place that offered them shelter and they did not want to relive the strife of Europe.

An exception to this rule was Rabbi David Einhorn of Baltimore. Einhorn had moved to the United States when the Austrian authorities closed his synagogue. Einhorn was a Reformed rabbi, and the government saw his preaching as endorsing the democratic ideas of the Revolution of 1848. So Einhorn had to go.

When he arrived in New York, David Einhorn was appointed rabbi of a large congregation in Baltimore, which was at that time called the “northernmost Southern City.” Slavery was legal there and merchants and working men alike profited from the extensive trade between the city and the Deep South. Einhorn knew that some of his congregants owned slaves and others profited from the cotton trade. He also knew that some rabbis defended slavery as Biblically authorized. 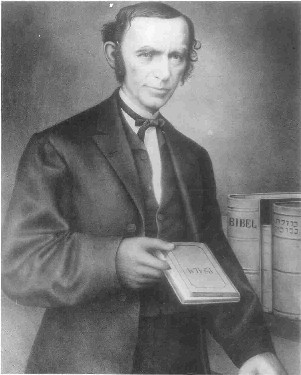 Einhorn, from an unknown date before 1879.

As the secession crisis deepened in 1861, Baltimore became a roiling cauldron of political discord. Gangs of pro-Southern fighters roamed the streets attacking Unionists and even plotting to kill Lincoln when he passed through the city on his way to Washington for his inauguration. Lincoln had to travel through Baltimore, which had given only 4 percent of its vote to him, virtually alone and in disguise to avoid assassination.

By 1861, Baltimore’s reputation for political violence had grown so bad that it was dubbed “Mobtown.”

Against this background of violence from pro-slavery mobs and disapproval from some in his own congregation, Rabbi Einhorn took the wolf by the ears when he learned that a New York rabbi had published remarks endorsing slavery as authorized by God in the Torah.

In an act of bravery that exposed him to great personal risk, Einhorn wrote in response to the use of the Holy Bible to endorse slavery:

Is it anything else but a deed of …rebellion against God to enslave human beings created in his own image and to degrade them…? Is it anything else but an act of ruthless and wicked violence to reduce defenseless human beings to a condition of merchandise and relentlessly to tear them away from the hearts of husbands, wives, parents, and children?

It has ever been a strategy of the advocate of a bad cause to take refuge from the spirit of the Bible [in] its letter. Can that book hallow the enslavement of any race… Can that book justify the violent separation of a child from its human mother?2

Einhorn dismissed the New York rabbi’s argument that slavery was justified by its long history stretching back to Abraham. “Does a disease,” he asked, “cease to be an evil on account of its long duration?”3

Einhorn would be one of the first rabbis to connect the fight for racial equality to the protection of all minorities. He saw abolitionism, the protection of the Irish against anti-immigrant Know Nothings, and the struggle of the Jews for civil equality as being all of the same cloth. No minority could be safe as long as it was safe to attack another minority. His words were published widely and he attracted the notice of Southern partisans.

In April 1861, following the Confederate attack on Fort Sumter in Charleston Harbor, riots enveloped Einhorn’s city and the rabbi became a target of the mob. Rioters destroyed the printing press that had published his anti-slavery essay and the rabbi’s life was threatened. He was forced to flee north.

When order was restored, Einhorn’s synagogue told him that he would only be welcomed back if he agreed to stay as silent as the other rabbis on the slave question. He refused, and instead embarked on a rabbinic career in Philadelphia and New York that made him a leading light of the Reform movement in American Judaism.