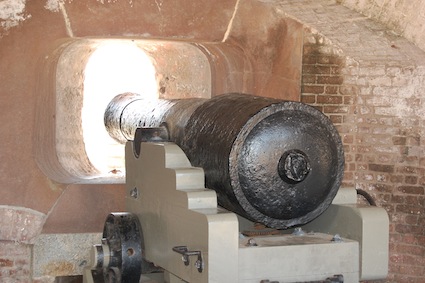 Last week, The Immigrants’ Civil War looked at the reaction of immigrants to the attack on Fort Sumter. Maryann Slutsky, the director of Long Island Wins, reminded me that the first death of the Civil War was of an Irish immigrant. Looking at that death tells us a lot about the Army in 1861.

After a day and a half of bombardment in which roughly 3,000 huge shells were fired at Fort Sumter, not a single soldier had been killed. The Union soldiers under Major Robert Anderson, who numbered only 87 able-bodied men, were forced to surrender when buildings in the fort were set on fire by the shelling.

As part of the surrender agreement, the Confederates allowed the heroic defenders of the fort to fire a 100-gun salute to the United States flag before taking it down and turning the fort over to the South. When the 47th shot of the salute was fired, the gun misfired, blowing off the arm of Private Daniel Hough, an Irish immigrant from Tipperary, Ireland. He soon died and was buried two hours later in the middle of the fort.

The misfire also set gunpowder stored nearby on fire. All the men in Private Hough’s gun crew were injured by the fire. Private Edward Galway, a very young man from County Cork in Ireland, was so badly burned that would die that same night after enduring excruciating pain for his last hours. A third man, Private George Fielding of Waterford, Ireland, was also horribly burned, but he would eventually recover. After six weeks in the hospital, he was able to return to the North.1

It may seem just bad luck that these three men were all Irish, until you learn the dirty little secret of the professional Regular United States Army of 1861. Roughly half the soldiers in the army were immigrants, even though only about one in seven Americans was foreign born.

Being a professional soldier, or “Regular” in the language of the day, was considered work beneath the honor of most native-born Americans. Soldiers led highly regulated lives in which they were not free to come and go as they pleased. They had to maintain tight standards of discipline under the threat of physical punishment for infractions. They were not free to take advantage of economic opportunities that might arise during their five-year terms of service. In other words, they were closer in status to slaves than to freemen.

For new immigrants, particularly those who arrived penniless following the disastrous Potato Famine in Ireland, joining the Regular Army meant regular food and regular pay. They used the army as a landing ground in the New World and hoped that during their years in the Army they would have a chance to learn the ways of the United States and save money to buy land when they were discharged.

The Regular Army in 1861 was tiny, just 16,000 men. Fort Sumter held just 0.5 percent of that army. But even at Sumter, immigrants from Ireland, Germany, England, and Scotland all served, endured the bombardment, and mourned the loss of the men killed and wounded in the last half hour of its life as a United States fort.2

Sources
1. Allegiance: Fort Sumter, Charleston, and the Start of the Civil War by David Detzer published by Harcourt (2001) pp. 308-309.
2. Id. p. 37. Private Hough’s unit, Company E, was ¾ foreign born. Of 32 enlisted men, 14 were born in Ireland, 7 in Germany, 2 in Scotland and one in England. Several of the native born appear to have been the children of Irish and German immigrants.