The big news for DREAMers that came out of the election yesterday is that the Deferred Action for Childhood Arrivals (DACA) program will continue. With one candidate promising to end the program, and President Obama vowing to continue it, the American voters decided to not turn these great young people into political pawns. The program will continue for at least the next four years.

Hundreds of thousands of undocumented DREAMers who held back in applying will now be encouraged to come forward. Their dreams will not be derailed by politics. Anyone who has not applied yet, should call CARECEN at 516-489-8330 in Nassau or 631-273-8759 in Suffolk Monday thru Wednesday for information. You can also call Catholic Charities at 631-789-5210.

The DREAMers were also big winners last night in the only state to have a popular referendum on giving in-state tuition to the undocumented. Maryland had passed its own DREAM Act, but anti-immigrant activists petitioned to put the Maryland DREAM Act up for a vote in the election. Their expectation was that this move would bring out opponents of immigrants to the polls in large numbers, defeating the DREAM Act and electing anti-immigrant politicians.  It didn’t work. By a large majority Marylanders voted to give these students in-state tuition. The voters were rewarding the hard work of these young people in making it to college in the face of tough odds and recognizing that they would contribute more as educated members of the community.

Last night was a rejection of the politics of division by tens of millions of Americans and an embrace for the DREAMers. 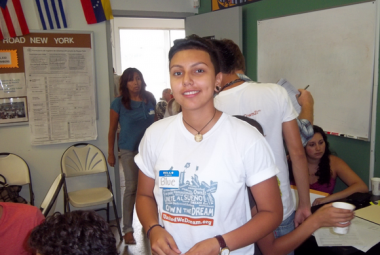