Scroll to the bottom for full list of articles in The Immigrants’ Civil War.

Anthropologists like to remind us that race is not a natural classification. Race is constructed by certain humans at certain times in order to maintain control over groups of people deemed inferior. Race consciousness is learned, not innate, and for it to be learned, someone, or some institution, has to teach it.

There is little evidence that new immigrants arrived in the US during the 1840s or 1850s with deep-seated hatred of African Americans. The newcomers had to be taught to value their white skins over all other personal characteristics, for in America, skin color was the single most decisive human characteristic, exceeding in importance religion, political opinion, and even gender. Race marked off the free from the slave. It delineated property from humanity.

In this new land, an Irish or German immigrant of middling ability might rise in society, but even the most brilliant slave would always be a slave.

The Jewish, Hungarian, Italian, Irish and other immigrants arriving in early 1850s America came to a country where both major political parties, the Whigs and the Democrats, were dominated by leaders who openly proclaimed the innate superiority of the white man above all others, and who defended the legality, and even the sanctity, of slavery.

Immigrants learned in the school of American politics that even the newest greenhorn had a leg up on every African American. So, as long as slavery and white supremacy endured, he was told, the immigrant would never be at the bottom of the social scale.1

The decay of the Whig Party after the 1852 election and the rise of the anti-slavery party, which came to be called the Republicans, made the Democrats, always strongly supported by immigrants, into the unchallenged bastion of the most aggressive form of white supremacy.

Most of the Southerners who would later occupy the highest positions in the Confederate government were leaders of the Democratic Party during the 1850s. They liked to call their political party “The Democracy,” but it was led by the first hereditary American aristocracy, the slaveholding Southern elite.

It was not only the Southern “Slavocrats” who mined the white man’s deep sense of privilege or who exploited his fears of so-called “Negro equality.”

Northern Democrats from the working-class slums of Boston to the rough western towns of the prairie warned white working men that the capitalists, and the Republican politicians they owned, aimed to make the black man the equal of the white worker, and thereby reduce them both to perpetual slavery.

Likewise, national Democratic leaders, including those deemed most moderate, did not shy away from the race card. Not at all.

Take, for example, the 1860 Democratic standard-bearer Stephen A. Douglas. Douglas was northern born and bred. He represented the fast-growing and technologically advanced free state of Illinois in the U.S. Senate.  He was a relative moderate within the party.

Douglas, like most northern Democrats, routinely played to voters’ prejudices against blacks. He worked to convince his audience that emancipation would adversely affect white workers, and told anecdotes designed to stir up primal fears of black men displacing their white counterparts in the beds of white women.

Douglas would trot out the sexual dangers of black men not just at private meetings, but at public speeches that he knew would be covered by the major newspapers and read about by millions of voters.

For example, in 1858, when Douglas was running against Lincoln for the Illinois Senate seat, he debated Lincoln in town after town across the state. In the second of these Lincoln-Douglas debates, Douglas interrupted his own speech to tell a story about the black abolitionist Frederick Douglass.

In the story, “Fred” Douglass is said to have been driven into an Illinois town in a fancy carriage. The well-to-do Republican owner of the carriage rode on top of the vehicle to drive it while inside the well-appointed conveyance sat Douglass and the rich man’s white wife and daughter.

“Black Republicans think that the negro ought to be on a social equality with your wives and daughters, and ride in a carriage with your wife, while you drive the team,” Stephen Douglas told his listeners.2 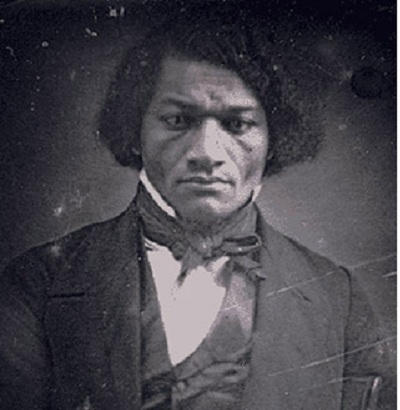 “Fred” Douglass wants your white wife and daughters, the Democrats warned their supporters.

The specter of white men having to turn their wives over to freed black men and being forced to serve the freed slave, as the black slave had once been forced to serve the white man, was the image of abolition served daily in the Democratic press to their newly arrived immigrant readers.

In 1853, Frederick Douglass delivered a biting analysis of how the Slavery Party indoctrinated immigrants:

The Irish people, warm-hearted, generous, and sympathizing with the oppressed everywhere, when they stand upon their own green island, are instantly taught, on arriving in this Christian country, to hate and despise the colored people. They are taught to believe that we eat the bread which of right belongs to them. The cruel lie is told the Irish, that our adversity is essential to their prosperity. 3

The lie was not only told, it was believed by hundreds of thousands. While many Irish immigrants would come to reject white supremacy, it was such a powerful ideology that its force would fuel the lynching of black men on the streets of New York in 1863.4

3. “The Slavery Power,” delivered to the American Anti-Slavery Society by Frederick Douglass, May 1853.

4. See also “Men at War” for a look at why native-born white Southerners who did not own slaves supported slavery.