Complete list of articles in The Immigrants’ Civil War at bottom of page.

As 3,000 Confederates moved north along the Rio Grande River towards Santa Fe in February 1862, a mixed army of United States Regulars and New Mexico Volunteers was assembling at Fort Craig on the banks of the muddy river. The Regulars were professional soldiers; the Volunteers were hastily put together units consisting mostly of Latinos who just weeks earlier had been farmers or craftsmen.

While the New Mexico Volunteers had joined the Union troops with the hope of keeping Texas Confederates from invading their homeland, many of them worried that the United States Army itself behaved more like an occupation force than an ally. “The New Mexicans, treated frequently as inferiors, bristled at the insults and prejudice to which Anglo officers and men subjected them,” according to historian Alvin Josephy. Compounding the problem, American officers, unable to speak Spanish, often could not be understood by the men they commanded. Pay, needed to support families, was also a problem: After the Nuevomexicanos soldiers learned that they would not receive their pay until a government caravan made it to Santa Fe in the late spring, a handful became alienated enough from the army to desert.1

Still, five regiments of mostly Latino Volunteers and hundreds of militiamen turned out to fight.

The Texas Confederates had established a notorious reputation as they moved toward Santa Fe. Confederate agents had tried to stir up Rebel support among Nuevomexicanos, but the Texans’ racist attitudes undermined those efforts. Texas Confederate soldiers had taken over the homes of Latinos in the southern part of the state and thrown families out of their adobes. They also had a reputation for sexually humiliating Latinas and robbing local villagers. As one Confederate wrote, the Confederates would “march all day and ransack the countryside.” A Union spy wrote to his commander that “females neither in nor out of their houses are safe” when Confederate soldiers were around.2 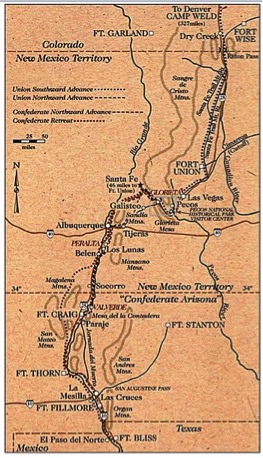 Confederate troops moved into Fort Bliss, at the extreme southern edge of the map, in the fall of 1861. Fort Bliss is near the city of El Paso, Texas. On January 3, 1862, the Confederate army began its march along the Rio Grande towards Fort Craig, where they fought Union troops on February 20 and 21. After the battle of Valverde, the Confederates marched to Santa Fe. (Source: Wikipedia)

The Confederate army arrived across from Fort Craig on February 20. The Rebels were on the east side of the Rio Grande and the Union fort was on the west side.

The Confederates needed to cross the river if they were to move on to Santa Fe, but Fort Craig was too strong to attack. Confederate commander Henry Sibley decided to move a few miles further north to a river crossing called Valverde to draw the Union troops out of the fort. 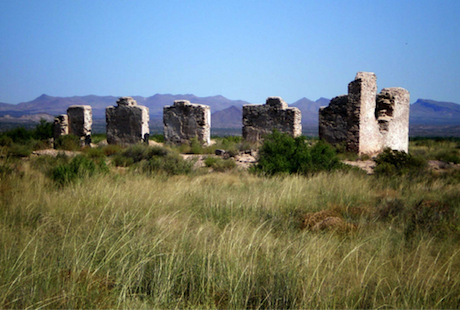 When the Confederates maneuvered into battle formations at Valverde, only one of the New Mexico Volunteer regiments was even reasonably trained and organized. The First New Mexico Volunteer Regiment was commanded by Kit Carson, a famous scout that had years of familiarity with Nuevomexicano culture. The officers and non-commissioned officers under him included a number of Latinos. Unlike most of the Anglo commanders, Carson viewed the Nuevomexicanos as capable and brave defenders of their land.

During the fighting that day, Kit Carson’s First New Mexico Volunteers were on the right of the Union line. When the fighting stalled, Carson led his men in a charge that broke the Confederates opposite him. At the same time, Confederates on the other end of the battlefield launched an attack of their own, panicking Union regulars and New Mexican militia protecting the small army’s artillery. When Carson and his men were ordered to retreat after the Union left had collapsed, they could not believe that victory had been snatched away.3

When the Unionists retreated back to Fort Craig, a Confederate delegation arrived soon after to demand their surrender. Confederate Private James Starr contemptuously wrote that his delegation was “stopped by a guard of eighteen Mexicans with a dutch sergeant and an Irish corporal… I noticed the men were nearly all Mexicans or foreigners.” These “foreigners” weren’t about to surrender.4

The Confederates had pushed the Union troops back into the strongest single place in New Mexico—Fort Craig. The Texans had used up most of their ammunition and lost nearly a third of their horses in the battle. While the Unionists in Fort Craig had a large supply of food, the Texans only had three days of rations left. Weighing his options, Confederate General Sibley realized he could not overcome the “Mexicans” and “foreigners” in the fort. He headed north, leaving the Unionists in his rear. This meant Sibley would no longer be able to receive reinforcements or supplies from Texas. He would lead a starving army deeper into what was now clearly enemy country.5

As they slowly made their way along the Rio Grande, Confederate treatment of Latinos would have a lasting effect on the Nuevomexicanos’ loyalty. Historian Alvin Josephy writes that “the high-handedness and ruffian behavior of some of the Southerners…reinforced the Hispanic inhabitants’ dread of the Texans and angered even those who had counted themselves neutral…”6

Union Coronel Edward Canby decided to make the Confederate progress as slow and miserable as possible. He sent fast-moving New Mexican cavalry ahead of the Rebels to harass the invaders the entire way. One company, commanded by a Spanish-speaking Irish immigrant named Paddy Graydon, had a particularly colorful record of disruption. In one attack near Socorro, New Mexico, Graydon and one of his men shouted orders at one another as though hundreds of Union soldiers were in the area. The seven deceived Confederates there surrendered to the two Union soldiers.7

Slowing the Confederates was vital because Colorado miners, who had formed a Union regiment of their own, were walking across the Rockies towards New Mexico as the Battle of Valverde was being fought. A second column of reinforcements was marching east from California toward Tucson and the Rio Grande. Every hour the New Mexicans could steal from the Confederates would bring the Union cause closer to success.8 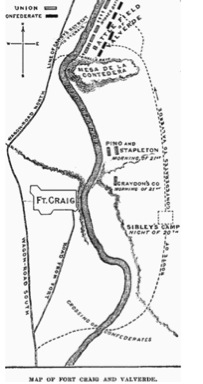 7. “The Confederate Invasion of New Mexico and Arizona” by George H. Pettis in Battles and Leaders of the Civil War pp. 104-106.