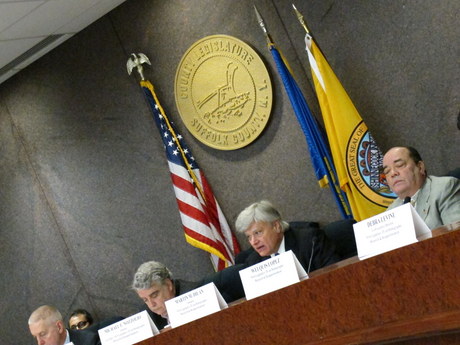 The following is prepared testimony by Daniel Altschuler of the Long Island Civic Engagement Table for the February 9 hearing in Smithtown on statewide redistricting.

I want to begin by thanking the members of LATFOR for holding this hearing today and giving me the opportunity to address you and share my concerns about the maps you have proposed.

My name is Daniel Altschuler, and I am the coordinator of the Long Island Civic Engagement Table (LICET), a coalition working to increase civic participation in low-income communities of color in Long Island. LICET is led by Make the Road New York, New York Communities for Change, the Long Island Immigrant Alliance, and the Central American Refugee Center. In the fall, we conducted a coordinated canvass that reached approximately 20,000 voters in the Town of Islip, in addition to hosting Suffolk County’s first-ever bilingual candidate debate in the race for county executive.

On Monday night, LICET joined Long Island Wins, the region’s immigration news source, and Noticia, Long Island’s largest Spanish-language newspaper, to host a bilingual community forum in Brentwood to educate local residents about the redistricting process and the implications for communities of color. The response was overwhelming. One hundred people packed our office, with representatives of over 25 community organizations—from the African-American, Latino, Haitian, and Muslim communities, as well as from organized labor. Despite their diverse origins, the message from everyone in attendance was clear—the maps proposed by LATFOR for Long Island are unacceptable, because they divide communities of color and reduce these communities’ ability to elect representatives who serve their interests.

By testifying today, I hope to convey the message of unity that was expressed at our forum, as many of those present on Monday could not miss a day of work to come to a hearing at 11am on a weekday. I would like to call attention to several specific points related to Suffolk County:

The LATFOR maps reflect incumbents trying to protect their own districts, rather than reflecting the burgeoning and cohesive low- and moderate-income communities of color in southwest Suffolk County, which constitute a clear “community of interest.”

The insufficient weight given by LATFOR’s maps to communities of color in Suffolk County is shocking, given that, in Suffolk, all of the population growth has been among these communities.

The comparison between census data from the years 2010 and 2000 reveals that, were it not for the significant increase in the Latino population and the modest increase in the African-American community, Suffolk County’s population would have actually declined.

The problem of insufficient weight to minority communities throughout the state is evident in both the Senate and Assembly maps, as both create fewer districts in which racial and ethnic minorities would either be the majority or exert strong influence than we believe is merited. For instance, Common Cause’s maps proposed more minority-majority and minority “influence” districts than LATFOR’s maps for both chambers.

The most egregious example in Long Island, however, is the splitting of Central Islip, Brentwood (where our office is located), and North Bay Shore into two different State Senate districts (SDs 3 and 4), effectively “cracking” this community of interest. The Greater Brentwood area is a cohesive community of specialty businesses, houses of worship, and community organizations that serve all three areas.  These large population centers possess an overwhelming majority of African-American or Latino residents.  In the proposed districts, meanwhile, the combined adult African-American and Latino population would be 32 percent in SD 3 and 28 percent in SD 4.  Moreover, the nearby majority-minority community of Wyandanch is also split in two.

Given the problems we see in SD 3 and SD 4, as well as the similar objections we have heard regarding the “cracking” of Hempstead in the Senate map, we believe that the LATFOR commission should undertake a sweeping revision for Long Island that keeps these communities of interest intact by creating a majority-minority district.

Barring such a revision, we will again bring together members of dozens of community organizations to advocate that Governor Cuomo veto LATFOR’s maps and force a completely new set of maps to be drawn.

This year’s redistricting process has generated unprecedented interest from communities of color in Suffolk County. On Monday night, representatives from a panoply of community organizations demonstrated their willingness—indeed, their eagerness—to educate themselves about, and speak out against, proposals that would diminish their ability to elect representatives that give primary consideration to their interests. If these voices are not heard by LATFOR and by the governor, we have every intention of continuing to use the various means at our disposal to ensure that the legislative maps respect this community of interest.