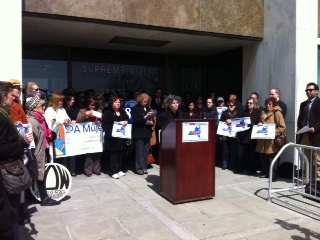 Over 70 groups and businesses across Long Island united on Thursday in support of Governor Cuomo’s Women’s Equality agenda.

At a press conference at the steps of New York State Supreme Court in Mineola on Thursday, advocates stood with the New York Women’s Equality Coalition, Long Island Region comprised of more than 70 business leaders, women’s groups, labor groups, civil rights organizations, medical associations, and religious groups united in vigorous support of Governor Cuomo’s Women’s Equality Agenda. Coalition members stood united with one another and with eight other regional groups across the state, urging broad support of this historic Agenda. 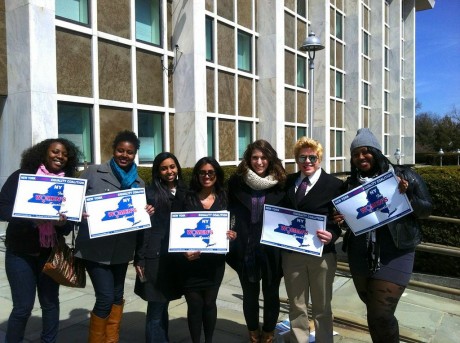 During his January 9 State of the State address, the Governor presented the Women’s Equality Agenda, a 10-point plan to break down barriers women face in the most essential areas of life. The Women’s Equality Agenda will reduce discrimination in the workplace and in housing, improve women’s safety and wellbeing, and ensure equal treatment under the law. Support for the Governor’s Agenda began to grow immediately following his announcement and, to date, more than 750 businesses and organizations make up the statewide coalition.

“The unfortunate reality is women are still struggling in many areas of our society, bringing economic instability to our local families, businesses and communities,” said Ellen Redmond, the Long Island Coordinator for the NY Women’s Equality Coalition.

This Agenda, and the extraordinary range of businesses and groups supporting it on Long Island and throughout the state, underscores that full equality for women cannot be achieved by taking partial steps or by focusing solely on a single barrier to equality. Rather, the Governor has proposed an ambitious Agenda that recognizes that women’s struggles, and the solutions, are all interconnected.

“Women’s issues must be recognized in order to achieve gender equality in our society. The Women’s Equality Agenda includes 10 important points that will address women’s rights and provide protections against discrimination in New York State. It will address the challenges which immigrant women face on a daily basis such as domestic violence, housing discrimination, sexual harassment, human trafficking and unequal pay” highlighted Martha Maffei, Executive Director of SEPA Mujer.

“After years of collecting, listening to, and telling stories of injustice and inequality experienced by women on Long Island, it is time for a change in policy,” said Serena Liguori of the Herstory Writers Workshop.  “The Governor’s proposal is a groundbreaking attempt to provide opportunity to women from all walks of life in all corners of the state, so that all women can participate fully and equally in society.”

“I stand here today on behalf of the young women and girls in New York and Long Island who cannot be here to speak for themselves because I know that the women’s equality agenda will make a profound difference in their lives,” said Silkisha Sneed, student at SUNY Old Westbury and leader of the student group Women United.