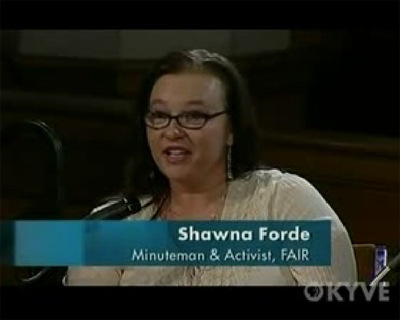 Shawna Forde, the head of Minuteman Civil Defense militia group, went on trial for her life this week. Forde is accused of killing Raul Flores and his 9-year-old daughter Brisenia in a May 30, 2009, home invasion designed to raise money for her “border protection” activities.

During testimony Tuesday and Wednesday, Brisenia’s mother, Gina Gonzalez, said that a short, heavyset woman, identified by Gonzalez as Forde, and a tall man entered her house pretending to be police officers in search of fugitives. When her husband, Raul Flores, challenged their identities, he was shot.

Police would later find six bullets in Raul Flores’ body; Gonzalez was also shot. As she lay on the ground pretending to be dead, she heard the man – whom prosecutors say is Forde’s second in command Jason Bush – reload his empty weapon while Brienia begged to be spared. He then fired two bullets into the crying girl’s face, mortally wounding her, prosecutors claim.

Bush and Forde were then joined by two Spanish-speaking men, Gonzalez said. Gonzalez identified one of the men as Albert Gaxiola, a local drug dealer whom her husband had reported to the police for stashing marijuana on his property. They ransacked the house looking for money and left when Forde received a call warning her that someone was coming, prosecutors say.

According to the prosecution, Forde returned to the Flores home a little while later and saw that Gonzalez was still alive. She ordered Bush to return to the house to finish her off, the prosecution alleges.

Gonzalez said that she managed to get to the family’s gun and shoot Bush, after which he fled.