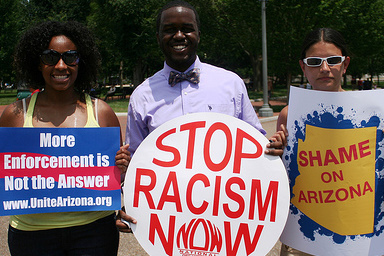 The Supreme Court announced today that it will review Arizona’s controversial immigration law SB 1070, which immigrant rights activists have denounced as discriminatory and an economic scourge for the state.

The Supreme Court has agreed to decide whether Arizona can enforce its controversial immigration law, over the strong objections of the Obama administration.

The justices made the announcement in a brief order Monday.

Federal courts had blocked key parts of the state’s Support Our Law Enforcement and Safe Neighborhoods Act, known as SB 1070. Arizona had argued illegal immigration was creating financial hardships and safety concerns for its residents and that the federal government has long failed to control the problem.

The administration has countered immigration issues are under its exclusive authority and that state “interference” would only make matters worse.

Arguments could be held in April with a final ruling by June. Justice Elena Kagan will not hear the case, since she had been involved in the administration’s initial legal opposition to the law as solicitor general, before taking the bench last year.

The possibility of a 4-4 split would prevent the four provisions of the law from going into effect, but not settle the larger constitutional questions.