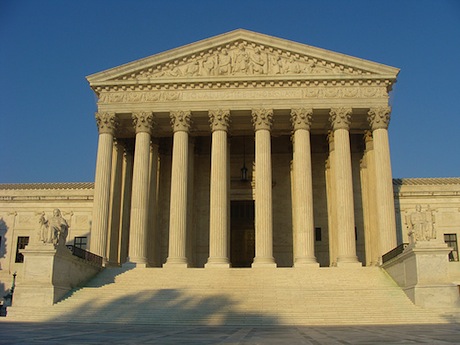 The Supreme Court this morning struck down three of the four provisions in Arizona’s SB 1070, upholding the requirement that Arizona police officers check the immigration status of persons they suspect to be undocumented. Even that provision, it seems, may not stand for long, according to Talking Points Memo reporter Sahil Kapur:

The court overturned parts of the law that criminalize one’s presence in Arizona without documentation, criminalize working or looking for work without legal status, and permit police to arrest people without a warrant if there’s suspicion that they’ve committed a deportable crime.

But the provision of the law permitting police to check a person’s immigration papers during lawful detainments was not thrown out by the court. Rather, the court declared that it was premature for the lower courts to block that provision of the law and left open the possibility of revisiting its constitutionality after it goes into effect.

SCOTUS Blog gives a detailed look at the four provisions of the law affected by ruling:

1. Police Checks.  Section 2(B) of the law requires the police to check the immigration status of persons whom they arrest before releasing them. It also allows the police to stop and arrest anyone suspected of being an undocumented immigrant. The Court held that the lower courts were wrong to prevent this provision from going into effect while its lawfulness is being litigated. It was not sufficiently clear that the provision would be held preempted, the Court held. The Court took pains to point out that the law, on its face, prohibits stops based on race or national origin and provides that the stops must be conducted consistent with federal immigration and civil rights laws. However, it held open that the provision could eventually be invalidated after trial.

2. State Law Crime of Being In The Country Illegally.  Although federal law already makes it illegal for someone to be in the country without proper authorization, Section 3 of the Arizona statute also makes it a state crime, subject to additional fines and possible imprisonment. The Court held that this provision was preempted and cannot be enforced. The Court held that Congress has left no room for states to regulate in this field, even to implement the federal prohibition.

3. Ban on Working In The State.  Section 5(C) of the statute also makes it a state crime for undocumented immigrants from applying for a job or working in the state. It is also held preempted as imposing an obstacle to the federal regulatory system. Because Congress obviously chose not make working in the country without proper authorization a federal crime, states cannot enact additional criminal penalties Congress decided not to impose.

4. Warrantless Arrest Of Individuals Believed To Have Committed A Deportable Crime.  Section 6 of the statute authorizes state law enforcement officials to arrest without a warrant any individual otherwise lawfully in the country, if law enforcement officials have probable cause to believe the individual has committed a deportable offense. The Court held that this provision is preempted. Whether and when to arrest someone for being unlawfully in the country is a question solely for the federal government.