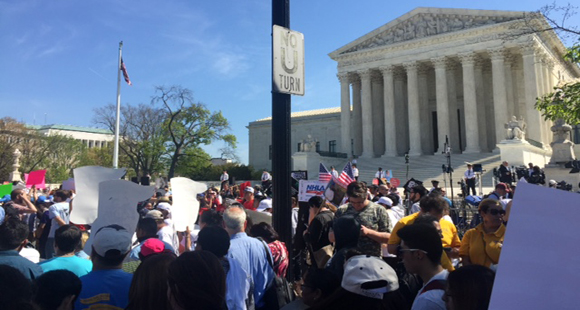 The Supreme Court heard arguments Monday on whether an injunction blocking President Obama’s executive action on immigration will be removed. Most analysts believe that the four liberal members of the Court favor lifting the injunction and that at least two of the conservatives believe the injunction should remain in place. Justice Kennedy and Chief Justice Roberts are thought to be swing voters.

Liberal Justices Stephen G. Breyer, Ruth Bader Ginsburg, Elena Kagan, and Sonia Sotomayor focused their questions on whether Texas and the other 25 states bringing the lawsuit against the Obama administration even had the right to bring the case in the first place.

Texas claimed that it would suffer harm if the DACA+/DAPA programs went into effect because it would lose money on the drivers licenses it will issue sometime in the future to those who are granted DACA+/DAPA. The questions implied that the four liberal Justices considered the harm remote and speculative. Justice Kennedy, a swing Justice, seemed to be unsympathetic to the states on this issue as well.

The argument the Justice Department made that, Texas lacked standing to bring the suit, is that the Federal government does not require the State of Texas to issue drivers licenses to DACA+/DAPA recipients.

The State of Texas will have to get over the hurdle of proving it will be harmed if DACA+/DAPA goes into effect, but it will also have to show that the president’s action is illegal. Texas argued that these programs created a new legal status called “legal presence” for the DACA+/DAPA recipients that was not contained in any existing laws.  Erin E. Murphy, representing the Republican majority in the House of Representatives, argued that the status of lawful presence could only be created by Congress and not by the president.

Justice Kennedy seemed receptive to Texas on this issue, saying that the creation of a new status is a legislative task, not an executive one.

We expect a decision on this case within the next two months. With only eight Justices on the Court, a tie decision will allow the injunction to remain in place.