The anti-immigrant circus in the media has not changed the minds of most Americans, who continue to believe that immigration is good for the country. Here is what a new Gallup Poll says:

Nearly three-fourths of U.S. adults say that, on the whole, immigration is a good thing for the country, a continued affirmation for a practice that has been a core feature of the American experience. While a majority of the country has always agreed with this proposition, the margin has sometimes been more tepid, with a bare 52% agreeing in 2002. Similar to the sentiment that immigration levels should increase, agreement that immigration is a good thing has gradually risen in the years after the 9/11 attacks. In the 2013 and 2015 surveys—both of which included minority oversamples—such agreement reached as high as Gallup has measured since it first asked the question in 2001.

Those who say immigration is hurting the country are at a new low. 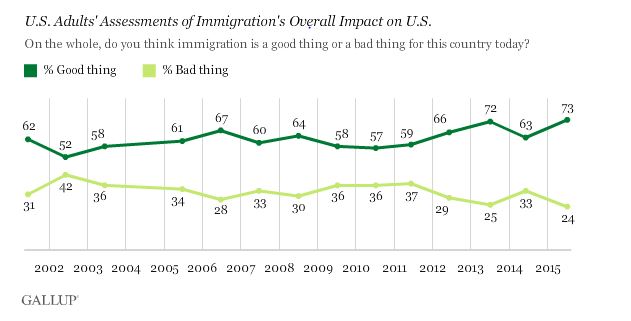