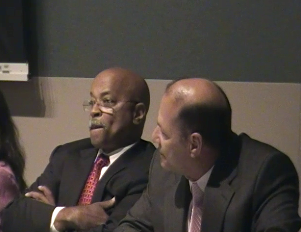 A week and a half after losing his position as head of the Suffolk County Police Department Hate Crimes Unit, a sergeant within the department announced on Tuesday that he will resign from a task force investigating the problem of area hate crimes, Newsday reports.

In recent weeks, both Reecks and the task force have faced public criticism and heightened scrutiny. At the same time, the Department of Justice continues a federal investigation into the Suffolk County Police Department’s handling of hate crimes and discriminatory policing against Hispanics.

On January 7, Reecks lost his job as head of the hate crimes unit when Suffolk County Police Commissioner Richard Dormer appointed Det. Lt. Stephen Hernandez, a bilingual officer with a higher rank, to the unit. Dormer said that change in leadership on hate crimes was meant to elevate the status of the unit, a de facto admission that the police department could do a better job handling such crimes.

The Hate Crimes Task Force—formed after the killing of Ecuadorian immigrant Marcelo Lucero—has also stirred controversy. For more than a year and a half, group has been researching the issue in Suffolk County, and a report was due out at the end of 2010.

Instead of a report, Leg. DuWayne Gregory, the head of the task force, held a press conference on January 4 alleging that the office of Suffolk County Executive Steve Levy had inappropriately obtained and edited the first draft of the document. Gregory filed a complaint with the Suffolk County Ethics Commission, saying and that the findings in the report were compromised.

In response to Gregory’s accusations, Long Island Wins launched fax and email campaigns to the heads of the county legislature and ethics committee last week, calling for an investigation into the matter, received several hundred responses.

Since it’s inception, the Hate Crime Task Force has drawn fire from advocates for its composition, with numerous county employees selected as members and, aside from Reecks, no experts on hate crime.

But even Reecks, despite his experience with the issue, found himself embroiled in a face-off over his handling of hate crimes during the course of research by the task force.

At one of the four public hearings on hate crime held by the task force, a self-proclaimed victim of hate crime came forward, levying accusations against Reecks, another task force member, the a high-ranking Suffolk official, saying that he was told not to make public the alleged hate crime against him.

At a September 2009 public forum in Patchogue, area resident Francisco Hernandez took to the microphone and described several incidents against him that he believed to be hate crimes, claiming that Reecks ignored his claim at a previous meeting. Hernandez also alleged that task force member Alex Gutierrez and Suffolk County Director of Minority Affairs Mel Guadalupe had pressured him not to speak about the incidents at the public forum.