In the summer of 2011, Symi Rom-Rymer traveled to Germany for academic research.

When Markus Mueller left his home in California for a one-week vacation to Bali in 1999, he never imagined it would change his life.

On his way, he had an overnight layover in Bangkok, where he met Tam Suwannali, a man from a small Thai town in the country’s far north.

“We had one night in Bangkok—just like in the song,” Mueller said with a smile. “It was very intense, but then I left the next day for Bali. I thought I’d never see him again.”

Mueller spent his vacation thinking about the man he had left behind, hoping, but never quite believing, that they would meet again on his way home. But when he arrived at his Bangkok hotel, there was Suwannali waiting for him.

Despite the long odds, meeting was the easy part for Mueller and Suwannali. Spending time together – within the confines of the biased US immigration system – was a different story.

They were lucky at first. Suwannali was granted a tourist visa that allowed him to stay for several months, but when he applied for the visa a second time, he was denied. Because they were in a same-sex relationship, Mueller didn’t even have the option of sponsoring his partner for a visitor’s visa.

Mueller and Suwannali are among thousands of same-sex binational couples who apply to live together in the US every year. A recent report released by the Williams Institute, a UCLA think tank, found that of the approximately 36,000 binational LGBT couples in the US, nearly all of them are struggling in a kind of legal limbo. 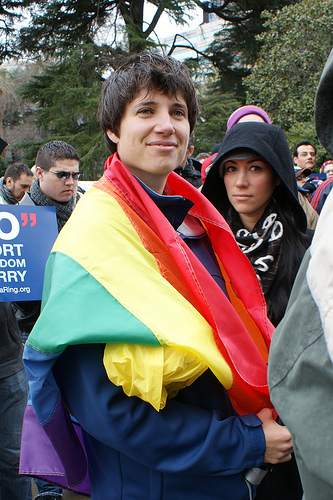 The problem stems from the Defense of Marriage Act (DOMA), signed into law by President Bill Clinton in 1996, which explicitly defines marriage as between a man and a woman. Under DOMA, a US citizen cannot sponsor his or her same-sex spouse for a green card.

In September, the U.S. Department of Justice acknowledged that DOMA is unconstitutional when used against lesbian and gay binational and immigrant couples, but the government continues to deny applications filled out by same-sex families and couples.

Steve Ralls, spokesperson for Immigration Equality, an organization that fights for LGBT rights in the immigration system, highlights this disparity:

“American citizens are often surprised that the US has made it so difficult for them to remain in their home country with their spouse or partner,” Ralls writes on the Immigration Equality website. “There is an assumption that their partners would be treated like heterosexual couples, but there are so many obstacles that these couples must navigate even to find temporary solutions to stay together.” Currently, he adds, “there are no permanent options for lesbian and gay couples to remain in the US.”

A 2011 Pew Research Center poll shows that 45 percent of Americans support gay marriage, up from 42 percent last year. These statistics, coupled with the recent victory for gay marriage in New York, suggest that public opinion is becoming more progressive on gay rights while the federal government has lagged behind.

Ralls sees the positive shift in attitudes toward LGBT issues as a sign that perhaps in the next five to ten years, binational same-sex couples will be able to immigrate and live in the US as easily as heterosexual couples. But for thousands of couples, the damage is already done.

Mueller and Suwannali are lucky.  When it became clear to them that they had no future together in the US, they moved to the German city of Cologne. As a dual US-German citizen, Mueller was able to easily sponsor his partner and in 2007, they got married there. Since Germany recognizes same-sex marriage, they have been able to put down roots and build a life together.

Although Mueller is happy with his decision, he feels a deep disappointment about how he was treated by the US immigration system.

“The US is a country that’s built up on immigration and on welcoming those who might not be accepted in their home country,” Mueller says. Now, he muses, “It has kind of turned its back on that history.”

Feature image courtesy of Michael_Lehet via Flickr and “Laura in Rainbow Flag at Marriage Equality Rally in Sacramento” courtesy of Fritz Liess via Flickr.