Yesterday, US District Judge Sharon Lovelace Blackburn upheld most provisions of Alabama’s anti-immigrant law, HB 56 – the worst in the nation. 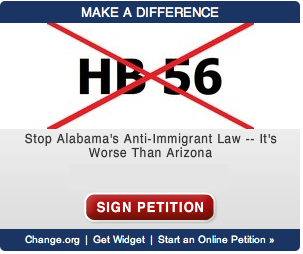 Alabama Governor Robert Bentley, who signed the law, said, “This law was never designed to hurt fellow human beings.” He must not think the undocumented are human beings because this will certainly hurt them and their US-citizen children.

The law will also hurt American citizens who appear to be Latino. HB 56 insists that cops demand immigration papers whenever they make a routine stop if they have a “reasonable suspicion” that the person with whom they are speaking is undocumented. Racial profiling has just been licensed in Alabama.

While the judge enjoined several parts of the new law, Gov. Bentley was absolutely correct in crowing that “with those parts that were upheld, we have the strongest immigration law in the country.”

Latino families already began leaving Alabama early in the summer, creating an acute farm-labor shortage in rural areas. Those who waited to see how the court ruled may find themselves in a dangerous position if they are unable to leave before local police begin arresting suspected undocumented immigrants.

The publicly owned water company in Montgomery, Alabama, has already indicated that it will check the legal immigration status of customers. In several parts of the state, electricity is supplied by municipal electric companies, which, under the law, are prohibited from selling electricity to the undocumented. That means houses in Latino neighborhoods, or even whole blocks, could be blacked out. Other municipal services like garbage collection may also be in jeopardy if they are funded through fees rather than taxes.

After bragging to interviewers about his toughness, Gov. Bentley struck a note of compassion saying, “As a physician I would never ask a sick person if he or she was legal or illegal.” But he does, however, want to cut the US-citizen children of the undocumented off from being able to drink water and flush a toilet. Please, Gov. Bentley. Spare us.

The ruling yesterday is at odds with all other rulings on similar laws. If it stands in the United States Court of Appeals, the matter will definitely be taken up by the Supreme Court.