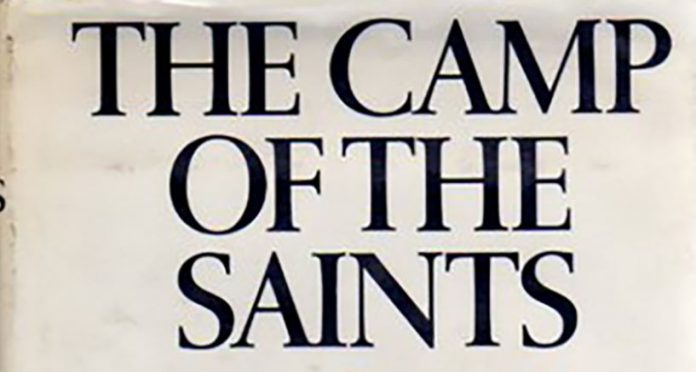 The Southern Poverty Law Center (SPLC) is publishing e-mails from Trump’s top immigration aide Steve Miller that show him promoting white nationalist groups and ideas. In 2015, Miller asked Breitbart News to write about the racist and anti-immigrant French novel The Camp of the Saints. The book depicts an invasion of France by Indian migrants who rape white women and cause social havoc. The Camp of the Saints and The Turner Diaries are two of the most read works of fiction among Neo-Nazis, white supremacists and the so-called Alt-Right.

The chief promoters of The Camp of the Saints, a book you may never have heard of, are writers associated with the VDARE website. VDARE is named after Virginia Dare, the first white child born in the Thirteen Original Colonies. It is one of the most prominent white supremacist sites on the internet. You don’t need to take my word that The Camp of the Saints is racist, here is how VDARE describes the book:

The Camp of the Saints…is a novel about the end of the white race. Its eerily prophetic premise is that one day, the Third World masses decide to board what ships they can find and head for Europe. There is no apparent reason for their embarkation: No natural disaster, war, famine, or disease has struck. One day they simply push off from the coast of India.

The novel follows the ship’s long journey, but its focus is on the Europeans waiting for it—waiting for the “due date” of a new world. The cast of characters is large: media personalities, politicians, academics, priests, soldiers, small businessmen, workers—every typical profession in the modern world. That is obviously deliberate because The Camp of the Saints is about all of us—about white people. It is about our weaknesses, indulgences, and unwillingness to survive. The millions of Third Worlders are a mirror image of that civilizational masochism.

There are many books for dissidents that cover the science of racial differences, or chronicle non-white dysfunction, or even that serve as an example of what lunacies our enemies believe. But books about whites across the globe, as a race with a common past and a shared destiny, are unusual…

Instead of gaudily focusing on black thugs, Arab terrorists, or conniving Asians, The Camp of the Saints puts the white race in front of a mirror to ask, “Why do you bow to those who wish you harm and who promise you subjugation?” This question takes up most of the book because the Third World does not reach Europe until the very end. The story is mainly about what goes on in the minds of whites as the “armada” of aliens slowly approaches.

Mr. Raspail brilliantly depicts the weakness of the West’s elites. Even as millions of non-whites who shareno language, culture, or religion with Europe approach, media and government alike welcome this coming dawn that will end the West’s present Dark Age.