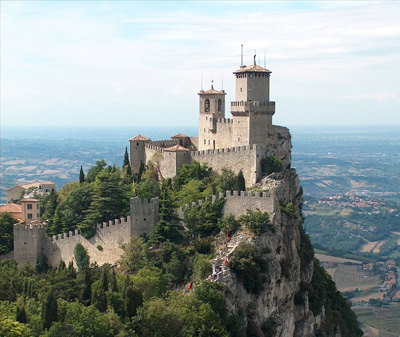 The New York Times has a weekly blog about the Civil War called Disunion. A recent post by Professor Don Doyle of the University of South Carolina included an interesting anecdote.

When Lincoln became president, the tiny Republic of San Marino wanted to show support for the embattled United States, so the 1,400-year-old nation offered Lincoln one of the few resources it had: San Marino citizenship.

The Regent of San Marino sent a diplomatic letter to Lincoln, written in English:

“To give to the United States of America a mark of high consideration and sincere fraternity the Sovereign Counsel on our motion decreed…that the citizenship of the Republic of San Marino was conferred for ever to the President.”

The letter was sent to the American capital in New York. San Marino seems to have been unaware that the capital had moved from New York more than six decades earlier.

When the letter finally caught up with Lincoln, war had broken out. Lincoln took time out to send a reply: “Great and Good Friends…although your dominion is small, your State is nevertheless one of the most honored, in all history. It has by its experience demonstrated the truth, so full of encouragement to the friends of Humanity, that Government founded on Republican principles is capable of being so administered as to be secure and enduring.”

Lincoln said that he gladly accepted the “honor of citizenship.”

After I read this post, I wondered what the people in Arizona proposing laws designed to take citizenship away from the children of undocumented immigrants would have made of this correspondence. These folks defend their misguided bills as a way to insure that children with “divided loyalties” not be allowed to become citizens. In fact, several politicians backing these laws have specifically said they would not want a person with dual citizenship to ever have the chance to grow up to be president.

Would they have insisted Lincoln step down as president when he became a San Marinian?

Lincoln had a confident view of American citizenship. He understood that loyalty to America came not from ancestry or legalisms, but from devotion to the principals of free government and attachment to the ideals of the Declaration of Independence. He knew that men with impeccable pedigrees in America, men related to Thomas Jefferson and George Washington, enslaved other men, women, and children and now made war on the American republic. He also saw that men who had immigrated to the US just a few years before, many not yet even citizens, were already flocking to the colors to defend the constitutional government of the United States.

Lincoln understood that citizenship inhabits the hearts of the free, whatever the circumstances of a person’s birth.

Maybe the so-called patriots in the Tea Party would want to revoke Lincoln’s citizenship after all.

1. Immigrant America on the Eve of the Civil War  – Take a swing around the United States and see where immigrants were coming from and where they were living in 1861.

2.  1848: The Year that Created Immigrant America  – Revolutions in Europe, famine and oppression in Ireland, and the end of the Mexican War made 1848 a key year in American immigration history.

3. Carl Schurz: From German Radical to American Abolitionist-A teenaged revolutionary of 1848, Carl Schurz brought his passion for equality with him to America.

2. Should Lincoln Have Lost His Citizenship?