At 2:00 this morning, Senator Chuck Schumer filed the Border Security, Economic Opportunity, and Immigration Modernization Act, the immigration reform proposal drafted by the Senate Gang of Eight. The bill is over 800 pages long and no one outside of the senators and their staffers has read the entire bill yet. It will take at least a half-a-day before advocates, immigration lawyers, and law professors have finished their first read and several days before we can understand the full weight of the bill.

Just at first glance, I see this legislation as the most sweeping change in immigration law since the Johnson administration eliminated white racial preferences in the old immigration laws. It creates a genuine pathway to citizenship for the undocumented, but it studs that path with potholes for the poor and unwary. It eliminates the visa for the brothers and sisters of United States citizens, but it ends the two and a half year waits that spouses of permanent residents used to have to endure to reunite their families. It creates new visas for scientists, but it ends the Diversity Visa program that increased immigration from non-traditional sending countries like Nepal.

The complexity of the bill is one reason you are likely to see the immigrant rights community remain measured in their comments over the next day or so. We have to absorb the interplay of different parts of the legislation. In my own conversations with advocates over the last few hours, most have sounded encouraged by what they have seen, although there is also dismay at some of the new provisions. One theme that emerges consistently is that the bill must be seen as a whole and evaluated coolly. We should not fall in love with the bill because of the provisions we like, nor should we condemn it for those aspects we don’t care for.

In the end, this bill will form the core around which any immigration reform legislation will pass or fail this year.  It is a serious piece of legislation and we must give it the same seriousness in our analysis. 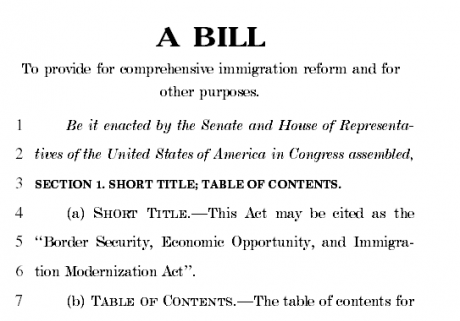