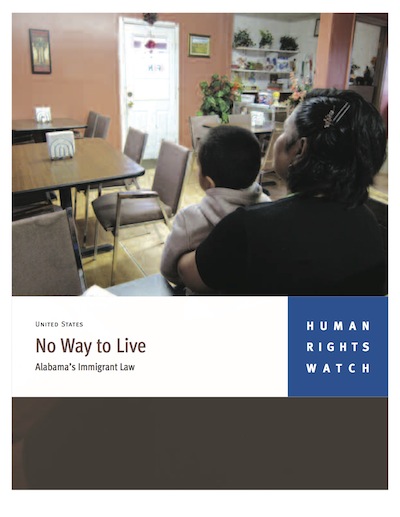 A new report from Human Rights Watch takes aim at the human rights violations in Alabama, saying that the state’s new anti-immigrant law “denies unauthorized immigrants and their families, including US citizen children, their basic rights, threatening their access to everyday necessities and equal protection of the law.”

According to the report, a provision in the law that bars undocumented immigrants from doing business with the state has been a major impediment to human rights.

“An unauthorized immigrant who tries to do so is committing a Class C felony, punishable by 1 to 10 years in prison and up to $15,000 in fines,” it says, adding that as “a result, state and local agencies have declared that unauthorized immigrants cannot sign up for water and other utilities, live in the mobile homes they own, or renew licenses for their own small businesses.”

The new law has also cut the undocumented off from police and court protection.

“Several people reported to Human Rights Watch that victims of crimes were afraid to report them to the authorities,” the report says. “Some who had been victims of wage theft felt they could not recover those wages because the law denies unauthorized immigrants the right to enforce contracts in Alabama’s courts.”

The report adds that the law new effectually creates licensed discrimination against Latinos.