With the decision by the Trump administration to turn away refugees my thoughts inevitably turned to the destruction of European Jewry during the Holocaust. I was born a decade after the war, but I knew Holocaust refugees all of my life. 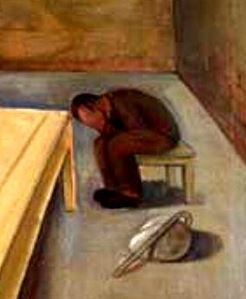 One of the most haunting paintings to emerge from that tragic era is The Refugee by Felix Nussbaum. The painting shows a room that looks like a prison cell, but one with an open door. In spite of its harshness, the room is a temporary resting place for the despairing man with his head buried in his hands and his belongings in a sack at his feet.

Nussbaum’s own story was that of the refugee. He was a young artist studying in Rome when the Nazis took power in Germany. His parents fled the country during Hitler’s first year in power, but they decided to go back to Germany when the violence against Jews seemed to subside. Felix did not go back and he begged his parents not to risk a return to Nazi Germany. The artist went to Belgium instead where he would be safe.

In 1939 Felix’s parents again fled Germany, this time for the safety of Amsterdam. It was around the same time that Nussbaum painted The Refugee. On the bare table the only visible object is a globe, half -shrouded in darkness. The Refugee is looking for a new home, but all he sees is a dark and unwelcoming world. He is painfully alone. Outside the open door are dead trees and crows waiting to devour a corpse. 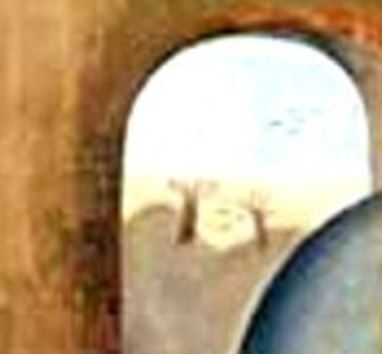 The year after Felix painted The Refugee, the Nazi’s overran both Belgium and the Netherlands. From August 1940 until July 1944, Felix lived in hiding. Over the four year period, his parents, his brother, and his wife were all exterminated. Finally, with the advancing allies on the verge of liberating him, Felix too was murdered by the Nazis.

Today’s refugees also flee from place to place. No place is willing to allow them to call their new country “home.” Many just find temporary refuge and then are sent back.